And those are just two of several components. That’s because Belize is yet to clearly define its maritime policy. El Salvador’s Deputy Minister of Transport Saul Castelar Contreras, who leads the delegation to Belize, explains how it can aid the country in doing that, including responding to phytosanitary issues in shipping and handling. 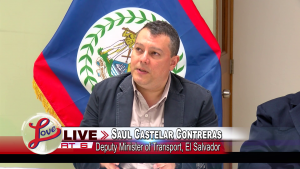 Saul Castelar Contreras, Deputy Minister of Transport, El Salvador: “I think one of the objectives that we have in welcoming Belize into our organization is that we see a lot of potential to help Belize raise some of the standards that are currently in place and to have them go up to the level that other countries in the region have already achieved. One of the main aspects that we were outlining before, and this is just a very logical question from and as a Belizean and if I were from Belize I would ask what’s in it for us as a country, there is a membership fee that comes along with belonging to COCATRAM and what you need to ask yourself is well if I’m going to pay x amount of money will I get it in return ? Am I getting more out of it and I was explaining that you need to have your maritime objectives very clearly defined in my opinion and just like Major Swaso said I think this is the right time to do so because I feel that there is already some objectives that this maritime authority has already outlined that they want to achieve that are going to be easier to achieve as a part of COCATRAM. Just like you said elements can be improved just as well as environmental protection elements that maybe are not being considered at this time.”

Deputy Minister Castelar also spoke on the organisation’s willingness to help Belize develop its policy while ensuring that it meets globally accepted standards.

Saul Castelar Contreras, Deputy Minister of Transport, El Salvador: “We would like to help Belize with the deficiencies that there might be in the current maritime policy. Even if you don’t have an outline of your policy and you need to write it down and establish a document you certainly are conducting different actions within the maritime sector that are in a way or another reflect what this current administration believes are the best ways to move forward with maritime policy of your country and I think that those objectives from what I’ve been able to discuss with Major Swaso are fairly aligned with what COCATRAM looks which is supporting the different countries into achieving their maritime goals.”