Meanwhile, Belize’s war on drugs continues. Last year, we saw about fifteen drug plane landings in Belize with law enforcement authorities intercepting three of the illicit flights. Tons of cocaine were confiscated and several persons were arrested and charged including police officers. And soon after, Police Commissioner Chester Williams admitted that the cartels had infiltrated the Belize Police Department and corrupted his officers. The Commandant of the Belize Coast Guard, Rear Admiral Elton Bennett did not go that far but he suggested that there may be a possibility that some of his officers may be compromised. 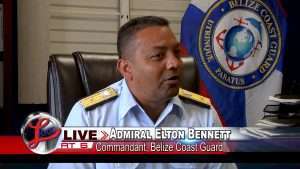 Admiral Elton Bennett, Commandant, Belize Coast Guard: “So far I haven’t seen any evidence of it. I wouldn’t go to the point to say that they have not but we have not had any operations that we question to the extent of drug traffickers involvement in the Belize Coast Guard. It’s something that we keep an eye on as a matter of fact one of the things we did last year was to establish an internal unit to investigate those allegations and so far we have not been able to put our finger in anything to say ‘yes we have been infiltrated.’ Not to say that it’s not happening, without a doubt that drug traffickers definitely would want to come after members of the Belize Coast Guard but I think we’re credible enough to deter those temptations from the drug traffickers.”