The 46-page report of findings and recommendations from the Commission of Inquiry was released yesterday after being tabled in a recent Cabinet meeting. One of the declarations made by the commission was that the time had elapsed for any criminal proceedings to take place; but investigating persons to be charged or held criminally responsible was never the objective of the commission. According to the commission’s chairman, Senior Counsel Andrew Marshalleck, the objectives were clear in the terms of reference. Additionally, the Chairman pointed out that there was no compliance with the law and that there were numerous players involved.

SC Andrew Marshalleck, Commission of Inquiry Chairman: “The terms of reference were clearly set out in the notice of appointment which was published in The Gazette and it was in essence to determine what were the applicable rules and procedures governing the sale of government assets, to determine whether they were breached and if they were breached by whom and to recommend what if any consequences are to flow from that.”

Reporter: So at no time was it really and truly too prosecute anybody or bring anyone to charge for any misconduct or bribery, corruption anything like that?

SC Andrew Marshalleck, Commission of Inquiry Chairman: “No the Commission of inquiry is an inquiry, it’s an investigation and the result of it is to make recommendations which are then either taken on board by the relevant authorities or they are not. The role of the Commission is not to prosecute anybody to find anybody guilty of anything.”

Reporter: Alright and so in essence the Commission has met those objectives in the 124 points in the report.

SC Andrew Marshalleck, Commission of Inquiry Chairman: “Well I certainly think so. As to identifying rules that were applicable certainly to provisions of the Finance and Audit Reform Act , provisions of the financial orders and the storage orders are what governed. Whether or not they were breached they were entirely breached, there wasn’t even attempt to follow them, they were breached in respect to all of the sales not some of them. As to who was responsible everybody involved in it in One way or the other was responsible. It’s not a case where there were missteps in relation to one or two sales by one public officer or the other it’s a case where the entire process, the informal process adopted by the Ministry of Finance for dealing with these sales ran afoul of the law. It was never in compliance from start to finish so everybody who had anything to do with it acted wrongly in pursuing that informal practice and procedure.”

Attorney Marshalleck further explained to Love News that there were several recommendations made to the Government with an aim to avoid any reoccurrence of the informal sales of government assets. Among them are legislative amendments as well as policies governing the sale of government assets.

SC Andrew Marshalleck, Commission of Inquiry Chairman:  “As to recommendations we’ve made a number of them. We recommended that provisions of the Finance and Audit Act be amended. We’ve set out full in the schedule as series of amendments which we believe will greatly assist to ensure that this never repeats itself. It seeks to introduce a scheme whereby sales of assets for less than $10,000 are handled at the discretion of the Ministry of Finance, assets between $10,000 and $1,000,000 goes through one of the three tendering processes; the opening, the selective or the limited tendering depending on what the tender committee decides is appropriate and the tender committee is to comprise the financial secretary and the CEO and the finance officer of the ministry directly involved in the procurement of sale. The third aspect of it is that anything over $1,000,000 then must go to an open tender procedure. So that’s the overall scheme of what we’ve set out in the proposal amendments. In addition to that structure we’ve also recommended that-and asset management register be kept and this is a recommendation that is lifted directly from the draft IMF regulations prepared years ago in relation to this very same thing. That the asset register keep a running current value of all of government assets and that’s to assist in determining whether or not the price that you’re approving results in a gain or a loss to the revenue as a result of the transaction.”

While the inquiry was primarily based on the cheap and informal sale of government assets, there were other concerns that came about that allude to possible bribery and corruption. Interestingly, as well is the question as to whether certain members of the National Assembly can be disqualified after benefiting from the sales.

SC Andrew Marshalleck, Commission of Inquiry Chairman: “We’ve also made a number of recommendations on peripheral matters that arose during the course of the inquiry. The main one which everyone remembers of course has to do with the Toyota Tacoma which Deputy Prime Minister Hugo Patt  purchased and the circumstances surrounding the payment for that Tacoma and it’s possible link to the sale of quite a number of government lots to Kelvin Lee. We believe that warrants further investigation and possible prosecution if wrongdoing is found. As I’ve said it’s not our role to find the wrongdoing it’s the say that we’ve seen enough and there is certainly something here that warrants looking further into-and the authorities should look further into it. The other matter that’s peripheral that came to us was very obvious. There were quite a few sales of government vehicles to members of the National Assembly. There are provisions in our constitution which disqualify members of the National Assembly from continuing to sit where they have entered into contracts with the government. The issue here is that these contracts in relation to the Honorable Hugo Patt and the Honorable Michael Peyrefitte have been completed in the sense that they entered into contracts by to buy assets, they’ve paid for it, they’ve collectively assets and gone about their merry way so the issue is whether the disqualification persists in those circumstance and again it’s an issue that the Commission feels warrants further looking into and action if appropriate.”

Senior Counsel Marshalleck says while there is not much that can be done about the 112 government vehicles sold or the other assets, it is important that going forward there is not a repeat of such informal practices. 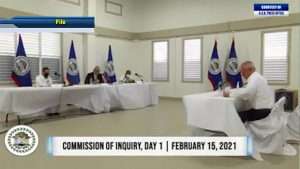 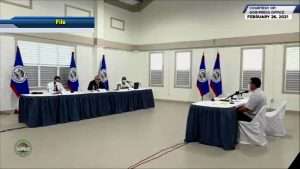