We start this edition of our newscast by telling you that no heads will roll, no one will be arrested or held accountable for the government assets sold off at rock bottom prices in the early part of 2020. This is one of the declarations made by the Commission of Inquiry. The final report from the commission was released today and is 46-pages long. You may recall that some months prior to the November 2020 elections, government vehicles and furniture were sold to ministers and associates in the Dean Barrow administration for little to nothing. By the time the Briceno Administration took office, the vehicle fleet was severely lacking and accountability was pretty much nil. The Commission was then set up by the new government to investigate these sales. On February 1, 2021, the team, led by Attorney Andrew Marshalleck, convened. The team conducted public interviews with 22 individuals within a period of six months; a drawn-out procedure due to the pandemic. The report lists one hundred and twenty-five findings and recommendations combined, but after all those hours and monies invested in this inquiry, as we noted, no one gets penalized. Perhaps the only good thing coming out of the investigation is the recommendations from the commission to improve the management and control of government assets. Early into the proceedings, Attorney Marshalleck pointed out that there was no proper inventory of the assets. Here is that byte from February 15, 2021. 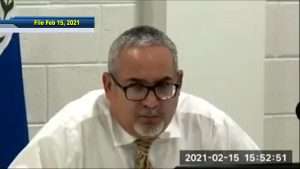 SC Andrew Marshalleck, Chairman, Commission of Inquiry:  “There is concern that there is no single place where there is a list of all the assets government owns and a list of other values that government considers their worth or reports them as being valued in financial statements. That’s the first point and it seems these assets are worth whatever these officers say they’re worth and there is no way or no process for verifying or testing any conclusions that they draw. So when Mr Vicente has his conversation with the financial secretary and then he has it with the Prime Minister whatever they say goes and there’s nothing to measure it against. I think that’s as much as we can see about what came out today. We haven’t formed any conclusions. There might be personal dispositions but the Commission hasn’t come to a conclusion. And we do hope to be as impartial as we are able to. As to smoking gun I don’t know how much more smoke you expect to find. We have a box of information, we now begin the process of probing that information. While we could ask the witness certain things you will appreciate that the information was just disclosed.”

Reporter: That box of documentation that you have, what does it entail?

SC Andrew Marshalleck, Chairman, Commission of Inquiry: “It’s 112 files for vehicle sales. The approvals, to whom it was sold, for how much it was sold. We leave the conclusions until we’re finished. It is what it is. You’ve seen it, I’ve seen it, we all have our impressions of what was said but we’ll draw conclusions when it’s all over.”

Reporter: We also saw where Mr Vicente indicated that at no time was the tendering process followed. Is this considered a gross dereliction of duty?

SC Andrew Marshalleck, Chairman, Commission of Inquiry: “You know that’s something that we as a Commission will have views on period from my own perspective it’s a breach of the Finance and Audit Reform Act.”

Among the 125 points highlighted by the commission were: while there are regulations that govern the sale of government assets within the Finance and Audit Reform Act, they were ultimately ignored. The report states, quote, “the sales all reflected the mismanagement of public resources and clearly involved waste and abuse.” End of quote. Another point highlighted was that the beneficiaries of these sales were persons with obvious political connections to the Prime Minister (Dean Barrow) and that the vehicles were acquired using intermediaries to mask their involvement. The report goes on to state that there were indications of corruption and bribery particularly in the case of the vehicle authorized to be sold to the former Deputy Prime Minister. In this regard the report states, quote, “this may possibly have facilitated the use of the sale of a motor vehicle to former Deputy Prime Minister, Hugo Patt to launder the proceeds of a bribe arising from the sale of government lands authorized and executed by him in favor of one Zhourong (Kelvin) Li.” End of quote. The commission goes on to write that the violation of financial laws in the sale of government assets seemed to have been so routine that former Prime Minister Dean Barrow and the Financial Secretary were candid in explaining the details of the informal practice. The commission added that the flagrant violations of the law very likely constituted actionable criminal offences; but as we noted the time has passed for anyone to be charged. At the end of all the findings, the commission has recommended for tighter controls and measures to be taken to avoid a reoccurrence. Its final recommendation in the report is that when the time comes for government assets to be sold, they should either be tendered, placed in public auctions or given to needy charity institutions and/or religious organizations. 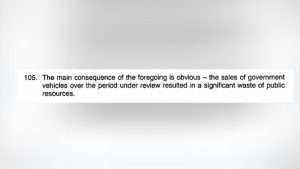 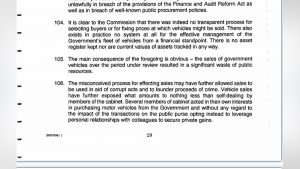