Police Commissioner Chester Williams today questioned the relevance of the United Democratic Party after the party’s chairman called for his resignation. Senator Michael Peyrefitte during a press conference on Wednesday criticized the Police Department as being “top-heavy” and accused the commissioner of failing to properly address the crime situation. Williams says the UDP is being hypocritical.

Chester Williams, Belize Police Department: “The Opposition is the opposition and they are always going to try to make mountains out of mole. At the end of the day, they were in power for 13 years and had the opportunity to have addressed the whole crime issue before it got to the stage it is now. That was not done. We are where we are now.”

Reporter: Do you believe it was hypocritical for the, for Peyrefitte to call for your resignation since he was the Former Police Minister and he knows what is happening? What has been happening.

Chester Williams, Belize Police Department: “Certainly Mr. Peyrefitte came on the belly of the beast. He was there. He certainly understands the complexity of fighting crime. He understands the challenges that we have to fight crime and so I was a bit surprised to have heard him say what he said but, again, he is in opposition and certainly that is the call of the Opposition and he works for them and he’s just carrying out the mandate of the Opposition. But, like you rightly said, it was hypocritical. But, I hold no qualms with Mr. Peyrefitte. He’s my friend. He’ll continue to be my friend but when he’s wrong I’m going to call him out.

Reporter: Well you ketch feelings about what he said?

Chester Williams, Belize Police Department: “No no no. I don’t. I don’t. I’m a professional. For someone in Opposition and in Government because he’s a Senator, to have commented the things that he commented is certainly a slap in the face of our police officers who are working so hard to keep our people safe so I have to respond in defence of my police.

Reporter: Do you believe they did it for political mileage?

Chester Williams, Belize Police Department: “I’m certain it’s to get on a political wave that they believe will get them to where they want to go. I don’t think it’s going to work because at the end of the day, the Belizean people know better.”

Commissioner Williams says the UDP’s call for his resignation is a political stunt. Williams chastised the UDP for using the deaths of citizens to gain political mileage.

Chester Williams, Belize Police Department: “He, again, is utterly wrong and if it is that he wanted to find out what the roles of the three D.C.C. ‘s are, he could have asked me and I would have told him. We have three Deputy Commissioners: one in charge of administration, one in charge of operations and then we have one who is in charge of the compliance branch. The newly created one is the one of compliance which is now headed by Deputy Commissioner Bart Jones. It cannot be that we continue to have a unit that we have a unit within the department that deals with inspection and compliance where the head of that unit does not answer directly to the Commissioner of Police. The whole jist of the unit that is headed by Mr. Jones is to ensure that we hold every police officer accountable. So, now the office headed by Mr. Jones is now in charge of compliance. It’s like a contractor general, right? It’s, he’s now in charge of compliance and when there’s a breach of the policy, it is Mr. Jones’ office that will take corrective measures against those who would breach the policy. Within that office has an inspection unit, so again, they go across the country and inspect every police station to ensure that equipment donated by Government or any other entity are accounted for and where those equipment are not accounted for then his office will then take corrective measures to then hold the commander accountable.” 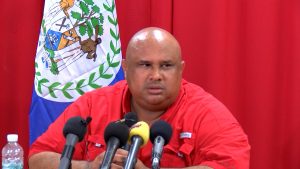