Doctor Anthony Richard Rosado is settling into his new post as the country’s Deputy Commissioner of Police. As we reported yesterday, the Police Commissioner recommended Rosado to the post in a letter sent to the Security Services Commission. The commissioner explained that the decision was not entirely up to him. 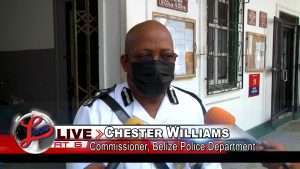 Chester Williams, Commissioner of Police: “Let me first to say that we have eight Assistant Commissioners of Police and of the assistant commissioners I would want to think at least about seven of them were good contenders of the post of deputy commissioner. It was not an easy choice for us to make. Between myself and the minister we discussed at length with a view to ensure that we find the right fit to be able to occupy the vacant post of DCP which was left by former DCP Broaster. And yes at the end of it all we agreed on Mr Rosado who is the current officer commanding eastern division to ascend to the post of deputy commissioner. So certainly yes that is going to require him leaving eastern division bootable move on where the desk of deputy commissioner of operations is at and so that leaves a void in Belize City  for the officer commanding eastern division and that void should be filled by no other than Senior Superintendent Anderson a very vibrant female police officer. She has a wealth of experience, a wealth of knowledge, she has worked in different areas including my staff officer at operations she was also my staff officer when I became Commissioner of Police for a number of months before she came to Belize City as a Deputy to Mr Dawson then. And so she has a wealth of experience, she was once officer commanding precinct 3 and currently she’s the deputy in eastern division. So it’s good to see that we’re going to have a woman moving up again in ranks with a view to have her elevated to the post of assistant Commissioner of Police.”

Rosado’s ascension has come with much criticism as there are several concerns on Dr. Rosado’s alleged affiliation with the United Democratic Party. This is a concern that was brought to the commissioner who said that’s neither here nor there.

Chester Williams, Commissioner of Police: “I’m not going to go into details where that is concerned. I am certain that Mr Rosado’s resume speaks for itself not to take away nothing from the other officers who I must say are also qualified but again we have to look at good succession plan in terms of who can eventually become commissioner down the road. I do not intend to be commissioner for life I see myself exiting in about 2 years time the most and there are certainly going to be a need to have someone who can ascend to the post. I must also say that ACP Bart Jones who is the commander of the legal unit in Belmopan his post is also a DC post, we have two vacant DCP posts and so we might be seeing as well Mr. Jones getting promoted to DCP and we should have good contention for the postal commissioner when the time comes. When I became DCP I was also the youngest assistant commissioner police and the most junior of those who were there before me and I leapfrogged many of everybody as well and the truth be told there will always be discontent but at the end of the day we are disciplined organization and we all understand that when certain decisions are made we have to accept it and we move on. Yes initially there is going to be concern and as the Commissioner of Police it’s going to be my duty to ensure that I address the concerns and try as much as I can to keep us together as administrators of this department with you to ensure that we deliver better service to the people of this country.”