Commissioner Williams also spoke on factors he believes contribute to the ongoing crimes. The media was one of the entities blamed for the crime situation based on the sensationalism rendered in the crime stories and the attention paid to the allegations of police brutality. 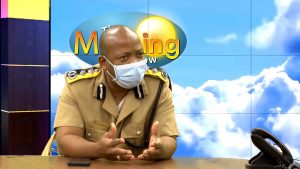 Chester Williams, Commissioner of Police, Belize Police Department: “One of the things that fuels these gang members is the fact that, oftentimes, the media supports them. You might not do it intentionally but when we see these gang members putting things on social media about police abuse or when police go after them and the media goes and interviews them and they give a lengthy interview about the police when in fact, what they’re saying is not true, for the most part. But, it is just being done with a view to try and make it seem as if the police are the bad guys. So when we lend airtime to criminals with a view for them to gain public sympathy and vilify the police, that does not help our situation. Look for example at the situation that happened in the St. Martin’s area last week Thursday night, when the police have received information that this fugitive, who was wanted by us, for a couple months now for a murder in Boom, was at this house and that there were persons there armed with firearms. The police went in and even the video that these people shared, you can clearly see where they were wrong. You can clearly see, in the video, projectiles being stoned at the police. The police vehicle was severely damaged. The police were being threatened. You heard one of them say “go and get the gun mek wi shoot them up.” All sorts of things were being hurled at the police. How do you expect the police to respond? How? The police are human beings too and we must ensure, or we must do our best to make sure that at the end of our call of duty, that we go back home to our families in one piece.”

Commissioner Williams added that Belize is one of the very few countries that report extensively on crime stories.

Chester Williams, Commissioner of Police, Belize Police Department: “It is a matter for the media and I certainly would wish that they would take that approach because when we do that, we just glorify these gangsters. They go and do their foolishness then they go and listen to the news at 6 so that they can see what was the effect of what they did and then, within their own sphere, they are glorified. So it needs to stop and the thing is that sometimes when the media interviews these parents or these girlfriends, they interview them so lengthy, right, and it, I don’t know. Like you rightly said, in other parts of the world you don’t see that, only in Belize. In Belize, we love sensationalism.”

Troy Gabb, Host, The Morning Show: I mean, should we now have a difference in terms of the concept where we said ‘“If it bleeds, it leads” to kind of move towards a more positive outcome? And so while you know that it’s there, it seems to be in a realm where you know, that if it’s subsiding and it’s not brought to the forefront, maybe it’s a way to, maybe it’s a way to have an impact, a positive impact where if the media doesn’t report it then it’s like it never happened.

Chester Williams, Commissioner of Police, Belize Police Department: “Well I wouldn’t go to the extent to say that the media should not report it because I don’t want it to seem as if we are hiding our crime problem even though that is done in other parts of the world, these things are not reported. But, we live in a  society that we believe that it is good to share but what we certainly can adjust is how you report it.”

Commissioner Williams, moving away from news media, also spoke on the videos posted on social media where residents are visibly seen blocking police officers from making arrests or conducting house raids. He says the behavior from the public can no longer be encouraged or ignored.

Chester Williams, Commissioner of Police, Belize Police Department: “We are not going to go easy on people who have no regard for the law. We cannot because if we do so then we certainly will be countenancing their behaviour and that cannot be the case.”

Troy Gabb, Host, The Morning Show: Because it seems to be that it’s the females who seem to be agitators in these videos. They are scurrying all over the place. They get in your way and they are making all of these.

Troy Gabb, Host, The Morning Show: Maybe examples need to be made. So maybe when the police goes somewhere you don’t need to come out and get involved in all of the melee. Stay in your house and let the police do their job.

Chester Williams, Commissioner of Police, Belize Police Department:  “They know for the most part, men would not want to manhandle a woman. So the women normally step in the front or they use children and you hear them. Oh they come into the house with big guns and the “pikni eena di house.” If you have children in your house then don’t allow criminals there because whether you have a one day old child or a 16 year old child, the police will enter when there’s a need to enter. So don’t try to shield the criminal behaviour by using your children as a shield. It is not going to stop the police and that is what people need to understand. We need to have a situation where parents, for the most part, must stop to condone the criminal behaviour of their children. If you listen to the interviews that the people give, they admit that they know what their children are doing, you know? But yet still they have a difficulty with police coming into their homes. If you are a criminal, you must expect the police to come. Period! It’s as simple as that.”