Police Commissioner Chester Williams today told Love News that there were discussions held surrounding a hit on him and the Director of Family Court, Dale Cayetano. The main suspect is cop killer Jasmine Hartin. Hartin who is awaiting trial for fatally shooting Superintendent Henry Jemmott is suspected of trying to put a hit on Williams and Cayetano. Through her attorney, Richard “Dickie” Bradley, Hartin has denied the allegations. She is claiming that the allegations are being made by a mentally challenged man who lives in Caye Caulker Village. Love News asked the Commissioner about it and he says that Bradley is trained in law, not mental disorders. Williams added that no threat can be taken lightly. 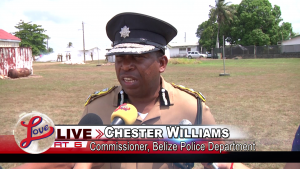 Chester Williams, Commissioner of Police: “I would understand that her lawyer is is trained in law and not in mental health for him to be able to say that she suffered from some mental ability, I’m not aware of that but be that as it may if it is that she had made the threat or not it is a matter for us investigate and make sure that we do not take nothing for granted. As I’ve said before in other interviews to other media houses we are not going to take nothing for granted and we will do what needs to be done to ensure that the threat is neutralized and that includes ensuring that the alleged maker of the threat is brought into police custody and properly interviewed, those who we believe have been hired to carry out the hit they too have been brought into custody and interviewed and so everything that needs to be done will be done to ensure that we get to the bottom of this and I don’t expect my good friend to say otherwise he is a lawyer for her and he certainly will have to hold the best interests of his client at heart. He’s being paid for that so I don’t expect him to say otherwise. Certainly it would appear that there were some talking at the very least and you know things normally start from a talk or  you cultivate things in your mind and then from there it comes to fruition and the fact that there was some talking means that there is some credibility to it and that’s the reason why I have said that is important for us to get to the bottom of it and do not take it for granted. “

Hartin is reportedly in hiding. She refuses to go to the police station without her attorney. Our newsroom understands that the man who allegedly concocted the allegation against Hartin is 33-year-old Lionel Neal. Earlier today, Neal, who Hartin says is her former maintenance worker, was arraigned in the Belize City magistrate court and charged with burglary with intent to rape and threatening words to Jasmine Hartin. Neal is claiming that he and Hartin were engaged in a relationship for over seven months and has filed a counterclaim against her.