The new fisheries regulations, which came into effect at the beginning of March, has fisherfolk from all across the country very concerned. We’ve reported on the opposition to the new rules from the communities of Caye Caulker and Corozal District. According to Albert area representative Tracy Taegar-Panton, the fishers who operate in Belize City’s Conch Shell Bay are equally displeased. She says they are concerned about their ability to provide for their families and a lack of consultation. She explained during Friday’s House meeting.

Tracy Panton, Area Representative, Albert: “There is a concern that was expressed to me, and I’m sure can be remedied. With the lack of consultations that occurred in the adjustments that have been made to the harvesting of lobster tails. Moving from a 3 inch tail to a 3.25, I believe it is, inch tail. As the fisherfolks have explained to me, it is not an insignificant increase. In fact, it represents an 8, and 8.3 % increase relatively and while I believe the premise for that decision is fairly understood. The concern is that the new policy is being implemented with minimum consultation. It is being implemented at a time when they themselves are not able to make the adjustments in terms of finding an alternative to their lobster fishing. What the fisherfolk have explained to me and I’m not a fisherman myself so I can only take their word is that harvesting lobster tails at 3.25 inches will represent all of two weeks of the lobster season and so it is really a major blow when it comes to their ability to earn, to safeguard their livelihoods and to earn a living from this sector.”

She has also called for alternatives to the farming of lobster tails, given the new regs, and has also asked the Government to explore opportunities to help all fishers during the transition period. She also reiterated that the fishing communities want know the science, which factored into the new regulations. However, for Blue Economy Minister Andre Perez, these regulations are not that new and simply that implementation of the regime is just now coming. 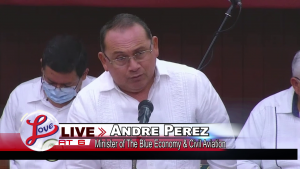 Andre Perez, Minister of the Blue Economy & Civil Aviation: “When you refer to the new policies, just for the record, these are not new policies, these are policies that were signed back then in 2009 under your administration. So, they’re not new policies. What is late in coming is implementation of this policy and this is also something that is a good thing. It is something that we have been following that we should be harmonised with the region. As you all know, we are part of OSPESCA which is part of the SICA regional body here in Central America and the Dominican Republic. So, we kept on consulting with the fisherfolks and up until last year, they were asking us to please hold the fort for another year, for another year. But because of the delicate and critical situation that the lobster industry is, and the conch and by extension the stone crab industry, it is time we implement and as far as consultation, it has been done across the years and particularly, there in Ambergris Caye and Caye Caulker. We have the documents to show that from going back in 2013 people were being consulted knowingly that this year, we all knew that we would have to meet and implement. Now as the responsibility on our Fisheries Department, indeed we should be doing that consultation and not only consultation but informing them as to what needs to be implemented. The policies are in place and also a call as well to responsibility of all the cooperatives which they unanimously supported as well. So again, in part, it’s part of their responsibility to share all of this information to their members. Now as far as the size of the lobster, we want to make it clear that again in keeping with the policies and the regulations that we have signed, it’s binding, we have to increase it and for good reason. And also I want to further mention the weight of the lobster tails that goes from 4 oz and we’re saying to 4 ½ oz. Now if I may clarify and go into more details, the acceptable size of weight that is in the Northern, North America, or the U.S. in particular, is 5 oz. and up in Europe they allow 4.5 and less or 4 oz. So all of this is taken into consideration and some of that smaller lobsters is exported to Europe. Now member, I agree with you that perhaps we need to take more than information to you folks there in your area. I point take that and this week we’re embarking on an ambitious plan to take meetings in Caye Caulker and Sarteneja and certainly, I can consult with you on a time and a date to visit your people and speak to them.”

A date for those consultations with Conch Shell Bay has not yet been determined.