A construction worker was injured in a shooting incident last night in Belize City. Just after eight o’clock twenty-one-year-old Steve Ferrell was riding his bicycle on Rasta Street heading towards Central American Boulevard when a man exited a yard and opened fire on Ferrell. He was rushed to the Karl Heusner Memorial Hospital where he was treated for gunshot injuries he received to the groin area. Police spokesman, ASP Fitzroy Yearwood says that investigators have already detained a Belize City man in connection with the shooting. 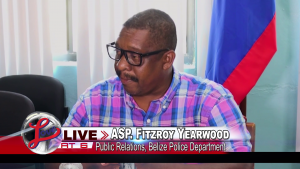 ASP. Fitzroy Yearwood, Public Relations, Police Department:  “We have since detained Gladden of an Antelope St. extension area  pending charges of use of deadly means of harm, dangerous harm, discharging a firearm and other related charges. He is presently detained due to quick police response. He was apprehended minutes after the incident occurred a little after 8 last night.”

ASP. Fitzroy Yearwood, Public Relations, Police Department: Well at this time I cannot say we have an open motive but I know that investigators have now been granted to record a statement from Mr. Feral,  so that will be done or should be done right now