Noe Gonzalez Avila remains behind bars after he was sentenced to life in prison for the murder of former Orange Walk Town Mayor, Ramon Cervantes, Sr.  Avila who pled guilty to murder in March 2022 appeared before Justice Herbert Lord in Orange Walk Town yesterday and was sentenced to life in prison. His accomplices, Angel Cardenas and Mateo Pott, both who pled guilty to the lesser charge of manslaughter, were sentenced to twenty-one years behind bars minus time served.  All three men have served eight years. Justice Lord ruled that Gonzalez will be eligible for parole in twenty-six years. However, since he has served eight years he will be eligible for parole in eighteen years. Love News spoke to Avila’s attorney, Norman Rodriguez today about the matter. 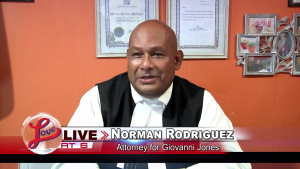 Norman Rodriguez, Attorney for Noe Avila: “The judge had three options to choose from. Fortunately for him that the death penalty was not pursued and that would have been the first option. The other one would have been life but a fixed term and of course the judge chose to apply the third which is life with the possibility of parole after a certain number of years.”

Dale McDougall, Love FM News: In a trial before he had pleaded guilty to the actual crime. What was the rational behind that ?

Norman Rodriguez, Attorney for Noe Avila: “His indication or my instructions are that he felt that they had a level of guilt in what happened and he believed that that was his way of saying to the society and to the family that you know he wanted to pay for whatever involvement he had in the crime it self.”

Dale McDougall, Love FM News:  And how has your client reacted to the judge’s decision ?

Dale McDougall, Love FM News: Any instructions from your client that he may appeal this case and describe for me what are perhaps one option if he decides to go that route ?

Norman Rodriguez, Attorney for Noe Avila: “He has not indicated as yet. I met with him after the adjournment was given and was made and I pointed out to him that it is an option that he has especially where the sentencing is concerned. If there is any possibility at this point he may want to look at the fact that no time was taken off for what we would term as an early plea. The judge made that decision and that is the court’s decision. As his attorney I have advised him that because of what the law says that time should be taken off for an early plea then that is an option that he might want to pursue.”

Cervantes, the father of the current Minister of State, was on his farm on July 1, 2014 on the San Roman Road, Orange Walk when he was abducted and bludgeoned to death. His body was found some four days later in a shallow grave near the Honey Camp Lagoon. The elder Cervantes was considered an upstanding, well-respected businessman in Orange Walk. He was also a PUP Senator and was very politically active in the 1980s and 1990s.