Over the weekend, an amateur video of a police officer slapping a phone out of the hands of a man went viral. The video captures the officer searching a vehicle before demanding that the man stops his recording. The officer is heard hurling expletives before hitting the man’s phone onto the ground. Police Press Officer, Fitzroy Yearwood says that an investigation has been launched by the department’s Professional Standards Branch Unit. 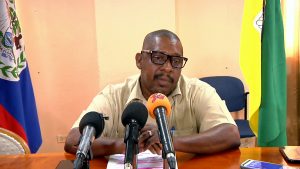 ASP Fitzroy Yearwood, Public Relations Officer, Belize Police Department: “I can assure you that an investigation was launched immediately. We know that the officer in that video is from Belize City and the precinct commander has been tasked to investigate that properly. What we are hoping for is that the person in that video would come forward and give us a formal report but I can tell you on our side one our legal office have already made certain directives and that officer will be dealt with internally regardless if we have a virtual complainant or not. We have been singing to our officers for quite some time that it is okay if people believe that they want to video the police doing their job, if you are doing your job at the highest level of professionalism you should have no problem with it and at the end of the day if you go against what we consider one of the department’s policies then you will be dealt with internally regardless.”

The incident took place sometime after midnight on Saturday near Princess Margaret Drive in Belize City.