Tonight we report that a whopping six hundred and seventeen new COVID-19 has been recorded. This puts the number of active cases to more than two thousand while close to six hundred more cases remain under investigation. There are also three COVID-19 deaths to report tonight, putting the total figure at six hundred and five. Ten persons are hospitalized- with two in the Intensive Care Unit. The positivity rate continues to increase and tonight is stands at eight point nine-five. These figures are a great cause of concern especially since the entrance of the Omicron variant. Deputy Manager of the Central Health Region Dr. Melissa Diaz told us more.

Dr.Melissa Diaz, Deputy Manager, Central Health Region: “You can see from the infographics that we’ve been sharing in a daily basis that the numbers have quadrupled in just under one week. So looking at that and looking at how fast the spread is and also looking at the clinical presentation of many of the cases we do believe now that clinically, epidemiologically we have omicron in the country. We have to look at what has shifted and when it has shifted because if you look just prior to Christmas we had been down to a positivity rate of about 2.5 so we do know that something has changed significantly over the last 7-10 ten days because we’re seeing first of all a change in the pattern of presentation of this illness and secondly an increase in the number of persons testing positive. So when we look at the clinical information and the epidemiological information we do know that this is different and delta, it’s different than alpha and it is following the pattern that other countries are reporting and it appears to be omicron. We do know that with omicron it seems like the incubation period has shortened a bit we see that people who have been exposed become symptomatic within 48 hours of being exposed and we do know that persons who are exposed can spread the virus even prior to getting symptoms so this is very important period. You might be well but if you know that you are at a function or if you know that you are working with somebody closely who is positive even though you feel well you’re still able to pass this virus  to someone else and so that then shows us the importance of using your face masks properly, keeping your distance, washing your hands, avoiding enclosed areas in large crowds because when you wake up the following morning and you feel unwell you may have already passed the virus onto other persons in your workplace, or in your home or in wherever you were.”

According to Dr. Diaz, there is no telling how long this fourth wave will last. The hope is that positivity rate would decline in a few weeks as reported in other countries affected by the Omicron variant.

Dr.Melissa Diaz, Deputy Manager, Central Health Region:  “With delta I believe we started to see numbers increasing in the end of August and mainly September on October were higher highest months and then it started to decline in the end of October and you know we had a very short break of a low positivity rate for about three to four weeks and now we’re going back up. It doesn’t necessarily mean that that will be the same length of time for omicron. Other countries who have gone through the way for instance South Africa they reported that they had four to six weeks of significant cases and now there are quite on a downward trend and things are improving quite a lot there. So from what we’re looking at omicron seems to be very transmissible, it happens very fast and it’s not really going to plateau out for three to four months but it will spike and then hopefully come down very quickly just as fast as it’s spiked. So we’re looking at that as more than likely what will happen in our country as well.” 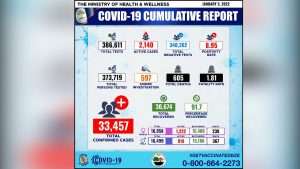 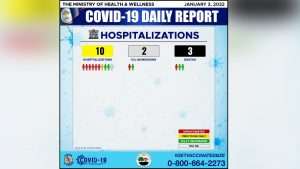 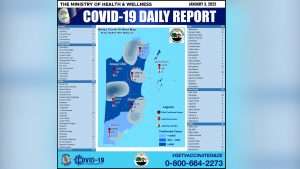