Aside from the two snakes that were confiscated from The Snake Man, a juvenile Morelet’s crocodile was taken from a woman. A medical examination of that croc showed that the crocodile was slowly dying. The veterinary report states that the croc’s skin was overall dry and wrinkled. The report also found that the croc showed obvious signs of neglect by malnutrition, lack of nutrition, and inappropriate environment. Deputy Chief Forest Officer John Pinelo Junior reiterated that it is illegal to have wildlife and as such, officers are cracking down on this activity.

John Pinelo Jr. Deputy Chief Forest office: “We believe that if you want to see wildlife go out into the wild, go into our protected areas or go to the zoo and you will see our wildlife but it is not safe from a health standpoint. It is not a good, like I said, portrayal of our opinion of our wildlife in the country of Belize and the tourism direction we want to go and so that is, those are the reasons we confiscated the animal from Mr. Usher. Like I said, we approached a woman first and we got the crocodile from her location and then we were told about the snake man and we had to visit him and that’s when we got the other two snakes from him. So we got two snakes from the snakeman and a crocodile from a lady. The crocodile itself was showing some sores along the bottom of its body because reptiles that live partially in water need sometimes to be in water and get their body weight off the bottom of their body so that they don’t start getting these sores but, apparently because this animal wasn’t in much contact with water, it had all these sores under its belly and the vet had mentioned that eventually that would cause infection, sepsis and then a very slow death because reptiles’ metabolisms are slow. I am not sure if other people have but I’m sure other people have around the country. Now what we are trying to do as a forest department is to try and regularise the situation. We don’t want people keeping animals and displaying them for tourists’ viewing pleasure or to make money because it is dangerous. We are, we have signed on to an agreement with a group. The agreement is One Health. It’s a component of a project that we are working on and One Health is focused on trying to prevent the transmission of diseases from wildlife to animals. Now and so that’s one of the policies we are heading towards. We don’t want people, as I said, to advertise animals on the streets and corners. If you want to see an animal, you should go into the parks. We’ve got many of them. You can do a bird trip. You can take a trip up a river, you’ll see wildlife. You don’t need to have them tied to a chain or a string. I know of people in Caye Caulker and San Pedro where we have confiscated animals from that were doing the same thing and we have warned them that if we catch them again we will arrest them. But it is something that has been a practice for many years and we’re trying to regularise it now because like I said, you should not have wildlife with you. I know some people will say “Well my grandma had a parrot” or “My grandpa had a parrot.” Ok so those days are done. We are more aware of what having these animals in captivity causes and, I mean, nobody is speaking for the animal. The animal suffers for years in a cage. It’s not in the proper environment. It doesn’t eat the proper diet. We just received a parrot from somebody who, it’s a Yellow Headed Parrot but the colours are all weird because it’s not been given the proper diet and so the poor parrot looks like a colouring book rather than a Yellow Headed Parrot because of a lack of certain vitamins and nutrients. So all these things we have to take into account and be aware of and have people know so that they don’t start thinking they want to keep an animal, a wild animal. A wild animal belongs in the wild.”

Like the snakes, the crocodile will be handed over to a wildlife rescue care for care. 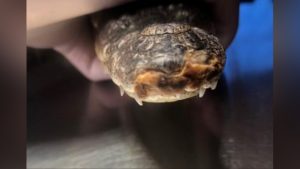