Last week we told you about the croc attack that left Caye Caulker resident Joshua Young hospitalized. Young was diving and spearfishing on the north side of The Split area in Caye Caulker Village when he was attacked. He received injuries to his forehead and chin and was taken to the Karl Heusner Memorial Hospital. Deputy Chief Forest Officer John Pinelo gave us an update.

John Pinelo, Deputy Chief Forest Officer, Dept. of Forestry: “Out in the coast, it’s mostly the American Saltwater Crocodile. It can grow to 16 – 18 ft. You know that is the extreme case, but those are the bigger ones. In the mainland, in the rivers and the lagoons, we have the Morlet Crocodile which is the smaller one but is still also dangerous to dogs and maybe a small child. Now, I say dangerous but, like you said, we haven’t had any issues where, I mean the last reporting, I don’t know, I remember, was in Orange Walk when I was a little boy that somebody got killed by a crocodile on Good Friday actually. So that’s the last time I’ve heard anything about a crocodile attack in Belize until now. There are lots of conjectures but the general thought is that he went underneath and he was fishing and probably scared the croc and the croc attacked in reaction. Now I am also conjecting because I wasn’t there so I’m not sure what the issue was but that is as far as we can hypothesise happened. There are lots of stories that he had fish with him. They were cleaning fish in the area. We don’t know if that is true because like I said, we have not spoken to Mr. Young but the animal probably got scared and attacked him.”

The Forest Department has partnered with ACES Wildlife Rescue to capture and relocate the crocodile but up to news time efforts have proved futile.

John Pinelo, Deputy Chief Forest Officer, Dept. of Forestry: “We just got a report at midday from the people from ACES and they have been there two nights and they say they don’t see the croc. They have put out food. There has been no response. Nothing has bitten the bait so they don’t believe the croc is in the area anymore.”

Reporter: However is it safe for Belizeans, anyone to swim in that area, to dive in that area?

John Pinelo, Deputy Chief Forest Officer, Dept. of Forestry: “I will not take that leap and say it is safe because I wouldn’t want somebody to say “Forestry said” and then they go there and they get hurt but it is highly unlikely that you will have another attack in a week. Because there has been such a long span in the time we’ve had reportings of attacks and crocs are generally afraid of us, so they kind of get out of the way when they hear people around. The only way, like I said, that they would probably react is if you frighten them or you bump into them off guard, which is probably what happened in this case.”

Reporter: Do you know if any other croc lives in the area, has a den in the area and if it’s the only croc in that area?

John Pinelo, Deputy Chief Forest Officer, Dept. of Forestry: “We don’t know. We cannot say but that area is known to have crocs. That’s their natural environment.”

The Forest Department is asking the public to not feed any crocs because this is a dangerous practice and can cause crocodiles to lose their fear of humans. 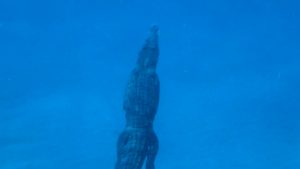