Tonight, the seven Cuban nationals accused of entering the country illegally on February 15, remain behind bars at the Belize Central Prison. On Thursday their case was adjourned for today after the court was unable to find a translator and errors on affidavits filed on the Cubans’ behalf were identified. The seven adults are being represented by Attorney Leo Bradley, who is the President of the Human Rights Commission of Belize. A hearing today was held virtually before Supreme Court Justice, Lisa Shoman who reviewed the documents that were submitted by the HRCB and the Immigration Department. Our newsroom understands that Justice Shoman ruled that the case is now able to proceed to trial. The Commission had filed a suit against the state, claiming that the fundamental rights of the Cubans had been violated by the Immigration Department. The trial will take place on May 7 and 9 respectively. 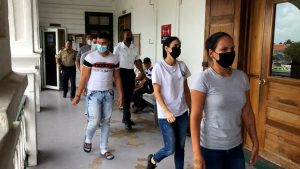