The Ministry of Public Service will be wrapping up its customer service survey within the next few days.  The ministry has been reaching out to the Belizean population to receive feedback on their experience with the different government departments.  This initiative is aimed at gathering information that will then be used to improve the areas of concern. Today, the Minister of Public Service, Henry Charles Usher explained that the lands and immigration department are just two of the offices that need to be addressed. 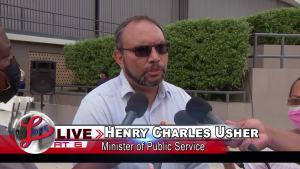 Henry Charles Usher, Minister of Public Service: “I believe that Friday is going to be the last day when they’ll be calling around and then we’ll be getting the report from the team, the consultants who were contracted to do that survey. And what they found is that there are certain hot button departments that we really have to address Vital Statistics being one of them, passport/immigration being another one and the lands department being the third real hot button department so we need to work with the CEOs in those particular ministries and with the customer relation officers in those ministries to make sure that we address the overall experience of Belizens going in to get that service.”

Usher explained that the ministry is looking into digitizing these government offices that see high volumes of people seeking services to create more ease of access for citizens.

Henry Charles Usher, Minister of Public Service: “I believe that it can happen. I takes embracing certain changes. We’ve seen especially with those picking of numbers we know that there are a lot of mischief going on there with the picking of the numbers but what we need to certainly address, and it takes a lot of resources,  believe me we’re looking at digitizing the services at Vital Stats at passport and so on but it’s really a matter of finding the resources, finding the money to get those services in place. Of course with COVID and with the new realities that we face every single day or every single week we’ve had to really change the way we’re doing business. I know there’s an appointment system at Social Security for instance and people complain about that appointment system so you want to make sure you have a service in place that is not only effective but also for that particular ministry where you’re going to have a lot of persons coming in you can’t really have one or two appointments in the morning or one of two appointments in the afternoon that’s not going to work.”