Dangriga Police are tonight on the receiving end of harsh criticism and some serious allegations of mistreatment and dishonesty being made against them after an encounter with some local fishers. Frederick Coote is one of the fishers, who say that the officers roughed them up and took their lobsters, phones and cash during an operation on one of the small islands, just off the coast of the southern town. 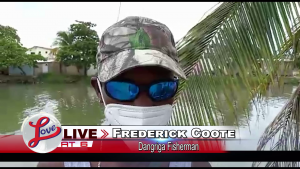 Fredrick Coote, Dangriga Fisherman: “Those guys just started to bully the man. He took away the gas. Okay? The 5 gallons of gas. He took the money, $500. He took seven phones and took the product: 300 lbs of lobster tails and they told the man they should just kill him right now.”

Reporter: So why did they take your products?

Fredrick Coote, Dangriga Fisherman: “No reason. We do honest living. We were just at caye camping like from Monday. We were building shade and we were diving. We have about 3000 expenses to clear right now. We were out there for long so they can’t just come and take away products and feel that way like that. At least gave us back our products. You can keep the phones. Keep the gas that they took and keep the $500. It’s like they are stealing from us.”

Reporter: Did you go to the police station to make a complaint?

Fredrick Coote, Dangriga Fisherman: “Yes. As we reached by our camp, we packed our things, got all of the workmen, the couple of workmen and we came straight in. We docked the boat and we went straight to the police station.”

Reporter: What happened there?

Fredrick Coote, Dangriga Fisherman: We reached the station and they called us inside the office. So, they just locked us up in there and they were talking to us like they were trying to intimidate us so my pa told them that he was coming to make a complaint. But the officers there, he called the officer’s name, Sergeant *censored* and *censored.* He called their names. So *censored* was there at the time right in the office because he took down the name of everybody who reached in there because it was nine of us who reached in there. So the next guy said so what are you trying to say? The police robbed you all? The police didn’t rob you all and they sent us to go from there. I called the Coast Guard base and the bg man at the Coast Guard said that we have to make a report about the police them.”

While Coote wants the lobster tails back, there is the issue of the 17-year-old, who says he was beaten.

Reporter: So what would you like to come out of this now?

Reporter: But how sure are you that it was police officers who went there and took away your product as you claim?

Fredrick Coote, Dangriga Fisherman: “The minor who they chanced, the 17 year old minor who they choked, boxed him five times in his back, boxed him five times in his back, he told us it was police officers and then when we reached at the station because he went with us at the station he showed us them. He pointed them out. They just watched him in his face and they left.”

Reporter: And did they charge any one of you for anything?

Fredrick Coote, Dangriga Fisherman: “They didn’t charge anybody for anything because we don’t have, we don’t keep, we don’t catch undersized.”

Our newsroom reached out to Police Commissioner Chester Williams for a comment on the situation, but our calls have gone unanswered.