In our discussion with Dr. Martinez, he also spoke about the country’s high rate of importation. According to the Statistical Institute of Belize, from January to May of this year, Belize imported goods valued at 1.1 Billion dollars, an increase of 44.6 percent compared to the first five months of last year. The SIB noted that the uptick in imports was mainly due to the high cost of fuel on the international market, which led to high volumes of fuel being imported. But today, Dr. Martinez explained that another factor has to do with the uptick in investments in the country. 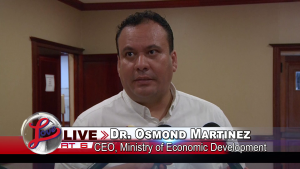 Dr.Osmond Martinez, CEO, Ministry of Economic Development: “The first answer is that, number one that means there’s more consumption. The moment you import more into a nation it shows that there is more consumption. More consumption means there’s more economic activity. More economic activity means there is more circulation of money. Number two is that whenever we have these foreign direct investments and lets say they are going to invest in infrastructure for hotels and everything. So let’s be realistic. Look if they want to import, if the building will take let say plumbing everything is imported. Electrical, everything is imported. Air conditioners everything is imported. You look for example the nails, everything is imported. Windows you know some are being manufactured here but not from zero it’s just an intermediary process that is being done. When you look for example at the tiles, imported. When you look for example at the outlets that you have, so everything is imported so this is one of the biggest challenges that we have and when you think about oh we can make cement blocks so we have the sand but the cement is being produced in Belize but the prime material is being imported so it’s an intermediary but just to move those cement blocks from one place to the other you will need a truck. The truck is imported, the parts are imported, the fuel is imported, the only monies that the resources that is locally is the driver so normally right 0now in the phase that we are all the imports, the foreign direct investment will definitely have a direct impact on employment and that’s one of the key things. The first phase is to move on to employment, second is to move on to added value products wherever we have the comparative advantage. And the third part which is a very key component is that we need to take advantage of the CSMEs the CARICOM Single Market Economy. Why ? Because we can ask big companies to come to Belize and manufacture in Belize and export to the Caribbean, we have to take advantage of that market.”