With the ministry determined to have the schools reopened, CEO Maheia explained the novel hybrid system is doable and efficient.

CEO Maheia explained that there were some schools that have already been engaging in hybrid learning from April last year. She further added that it is through these experiences that they have improved the reopening plans.

Diane Maheia, CEO, Ministry of Education:  “We actually started back in April of 2021 was the first time we did a phased in return. That was completely optional for schools we said you guys can tiptoe your way in if you’re ready. That led up to the end of the academic year. For this 2021-2022 academic year which started between August and September in October of this year October 4th we started the green light process again for hybrid learning. Between October and December we had 97 schools who had returned to hybrid. So 97 of the 600 we could say had already begun with hybrid period now we have over 500 of them-  520 who have already been approved So what we’re looking at is a significant population that’s getting ready to return. Over 200 we know already for Monday the 10th and then the others to dates staggered just a bit some of them are the 17th, the 21st, there are varying dates depending on the situations at the schools in areas. So I don’t have an exact student number who will be returning but I do have school numbers who are going back.” 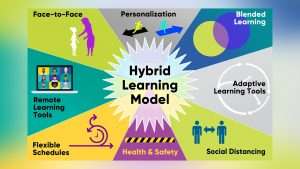