Tonight, police in the South are investigating a possible case of arson that led to the destruction of a well-known establishment. In the wee hours of this morning Ella’s Cool Spot in Hopkins Village, Stann Creek went up in flames. The blaze broke out just after two o’clock and consumed the entire building. Reporter Vejea Alvarez tells us more.

Vejea Alvarez, Love FM News: Tonight, Ella’s Cool Spot in Hopkins Village is no more after the restaurant and bar was destroyed by fire. The blaze broke out just after 2:00 this morning and is believed to be the result of a malicious act. Nearby surveillance footage captured the moment when an individual walked up to the building and set it ablaze. The owner of the establishment, Ella Carr, says she was alerted by a neighbour and rushed out only to find her business completely engulfed in flames. 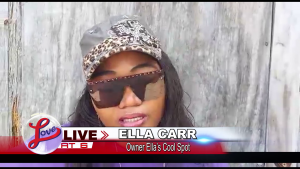 Ella Carr, Owner, Ella’s Cool Spot: “Approximately around 2:30 this morning, I received a phone call from my neighbour, Marion Nuñez, and he said that my business was on fire and I immediately flew to the area and when I got here I saw the whole building already in flames and all the neighbours were out trying to out it off but apparently the place was already in flames.”

Vejea Alvarez, Love FM News: Despite efforts to contain the blaze, the four wooden and thatched structures of the business were completely destroyed. Car says that the estimated cost of the damage is around $150,000, a loss that will tremendously affect her and her employees.

Ella Carr, Owner, Ella’s Cool Spot: “I have about 12 employees and it’s going to affect my workers and also the community as well and myself and you know, my son. You know I started Ella’s Cool Spot from scratch and to see it burnt down, all my hard work just went down the drain.”

Vejea Alvarez, Love FM News: The National Fire Service is yet to ascertain an official cause of the blaze but Carr says she strongly believes it was the work of an arsonist.

Ella Carr, Owner, Ella’s Cool Spot: “The Fire Department suspected that it’s electrical but the way how the fire just stated, it started from the south side of the thatched building and then if it was electrical, it would have started from inside the kitchen area.”

Vejea Alvarez, Love FM News: The building and its contents were not insured, however, a GoFundMe page has been launched by residents to assist in the rebuilding of the structure. Reporting for Love News, I am Vejea Alvarez.