This morning Handz and Hart Group donated fifteen wooden chairs to Ethel Vargas Preschool in Belize City.  A short ceremony was held this morning and Love News was there to speak with Group Leader Michael “Big Mike” Francis who explained that his group decided to embark on this initiative as a way to give back to their community and shine a positive light on the children. The Principal of Ethel Vargas Preschool, Barbara Antonio, received the donation on behalf of the school and she says that it was well-needed as most of their chairs are weak or broken. 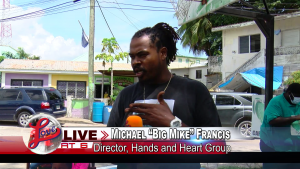 Michael “Big Mike” Francis, Director, Hands and Heart Group: “We’re labeled as or stigmatized as one of the communities that is a bad neighborhood so we’re trying to change that whole concept of the area so teaming up with the preschool is a good initiative so we can assure everyone that the stereotype and the thoughts that they have within this community is far gone so we wake every day and try to make a change within this community, work along with the kids because we know that the kids are the future so we stay focused. Me and the guys as you can see the guys are behind me and it’s been a while since Majestic Alley has been in the news for anything so we’re just trying to change the path, change the image because the media highlights only bad stuff so we’re here to try to make a difference and show them that there’s more to us and there’s more to this community that meets the eye.” 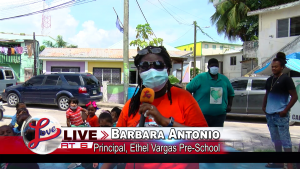 Barbara Antonio, Principal, Ethel Vargas Pre-School: “I want to say thanks to Mr.Mike and the Hands and Heart Group who had donated these lovely, strong chairs, you can’t get it anywhere else but here at Hands and Heart so I want to say if anybody else wants some chairs for their school you can come right here at Hands and Heart and you can buy some chairs. These ones were given to us free and I want to say thanks for the free chairs because these chairs will be benefiting our school because we do need chairs. We have some but they have been broken and they’re easily broken but for these ones I am sure that it won’t be easily broken because it has been made very strong.”