It was six months ago when Leader of the Opposition, Patrick Faber came out to the media, admitting to having anger management issues and admitting to seeking therapy. Those declarations came on the heels of a leaked video that showed him acting aggressively towards the mother of his daughter. Fast forward to today and Faber is in a new relationship, and has once again been caught at the center of reports of a domestic disturbance with his fiancée, Dr. Shanikka Arnold. The accounts that we have received are unconfirmed as our messages to Faber have gone unanswered. Sources within the Police Department have indicated that there were some hard talks between the couple, and a hammer was involved. There have been no reports of any physical assault, however, but we do understand that Faber had filed a report to Police saying that his Suburban vehicle was stolen by Dr. Arnold. The vehicle in question can be seen parked on the compound of the Queen Street Police Station up to news time tonight. Additional information reaching our newsroom say that Dr. Arnold reportedly told Police that taking the vehicle was the only way she could have escaped the fight. Our news team is on standby at the station and has since seen the UDP Secretary General, Dr Carol Babb enter the premises; her role or purpose unknown. Other members within the party were also unaware of what really transpired including Shyne Barrow. 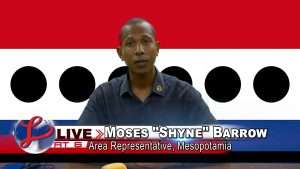 Moses “Shyne” Barrow, Area Representative, Mesopotamia: “You know it’s sad. I’ve heard the same reports that you and many other newsrooms have heard and I have refrained from commenting until I would see the police report and I really just hope that this is not true because this would be devastating. Another damaging blow, another setback to building our trust and confidence with the Belizean people and I just hope that it’s not true and if it is we need to take swift action as I advocated the last time we had such an incident in order to build trust and confidence of the people. I really hope that this is not true.”

The entire incident is somewhat déjà vu as when Faber was embroiled in the last domestic incident, it was at that point that he lost the confidence of the elected UDP Area Representatives. Shyne Barrow was propelled to the UDP leadership seat. It was and 84-day reign for Barrow who still has hopes at getting back on the saddle. The question tonight, is whether he will use this incident as a catapult for his leadership quest.

Moses “Shyne” Barrow, Area Representative, Mesopotamia: “ You know this is really not about me I won’t even – number one there’s a victim involved allegedly and I just hope that there isn’t a victim and that these are just rumors I really would hope so and if it is true I would hope that the Honorable Faber would seek help and that the party would be able to find its way forward without the distractions. I really hope this is not true.”

At the top of the story we told you that Faber had sought therapy for his anger issues following the June 2021 incident with his estranged partner and mother of his daughter. For context, here is a snippet of when he had addressed the media on the issue. 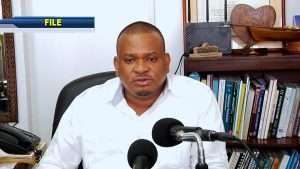 Hon. Patrick Faber: “I kicked a door, it was not physical to anybody and I need to say that, because apparently a lot of people have ran away with much more than that, but it does not excuse my behavior, it is not behavior that was becoming somebody that holds the kind of office that I hold and so I realized then as I may have realize even before that getting some help is not a bad idea and that is what exactly what I am doing. I concede that there are situations where my temper has gone way off and that is a matter that I need to address. In my view there are only a few people who can trigger me in that way, but the fact that it can happen warrants the kind of help I am now seeking and I am genuinely trying to seek that help. Domestic violence goes both ways as well. Men can be the subject of domestic violence and so this is a very touchy issue. I’ve told you I’m not going to get into all of that Jules, but you have to come to your own realization. What I have come to realize is that in those situations my buttons get pushed beyond where I want them to go and I have work on that and that is what I am working on. I’ve gone to family court, I will have regular scheduled visits with my daughter now and my daughter’s mother and I have agreed that we will do – I was away and now she is away and so once we get back in the same country we will do sessions to help us to be better co-parents. They say when you live in a glass house you don’t throw stones. So I myself can’t throw no stones. That’s what I am saying, but I am saying for the benefit of all who may be out there needing some kind of help, because it refreshes your own soul, because these situations aren’t very easy to deal with. I watch how many people are out there throwing stones and cast aspersions and they themselves – don’t pull my tongue. All I am trying to do to be honest with you is to love my children and have a good relationship with my children. That is the utmost thing that matters to me. I love my children and I become very passionate when that is turned against me. I realize I have an issue. I am dealing with it.”

We will have more on this story in Thursday’s newscast.