A family in Hattieville are in a debacle over a house that is being disputed by several members, even leading up to one woman shot and another one with an injury to the back. Over the weekend, there was a shooting that occurred in Hattieville, on Sunday, March 20, 2022. A Hattieville resident was sitting on her bed inside her bedroom when she heard what appeared to be gun shots being fired. Upon hearing the gun shots she, threw herself on the ground when all of a sudden she started to feel a burning sensation on her left calf. She then noticed that she was scraped by a bullet and her left foot was bleeding. She was then escorted to the Karl Heusner Memorial Hospital, where he received medical treatment. Today, our newsroom was informed that two men who were suspected to be the perpetrators had been detained. Love News spoke with Dorita Arnold, the mother and sister of the detainees, who said that they that they had been wrongfully apprehended. She stated that her family members were framed as a way to get rid of the man-power who can protect her daughter. Arnold explains further.

Dorita Arnold, Victim’s Mother: “They are targeting my daughter because of a house. A government house, my mom’s house. My mother is stating that the house is for Sherel Arnold. Sherel will go in there. And they are taking it to heart now. They are doing all kinds of things to make her not be able to get in the house and right now it’s problem after problem happening. Everyday I live in torment because it is everyday these people come outside and start to curse bad words and curse us. We are *expletives* and all of that. Everyday we go through problems with those people. Every day ma’am we are living in torment.”

The person more central to the dispute is Sherel Arnold, who is the rightful owner of the house in question. She states that she has been accosted on several occasions by her family members. She said she has reported it to the police, however, no action has been taken against them. In an interview with Love News, Arnold explained what happened. 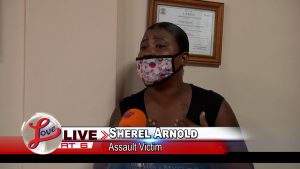 Sherel Arnold, Assault Victim: “She is the one who stoned me in my back.  My brother was telling me, sis let’s go and please don’t get yourself into problems because don’t you see what those little girls are into? It is problems they are into and I just saw her leave from my uncle’s house in the morning so I know that she just wants to have problems with me too. It’s not only my uncle. They are doing my uncle. They are doing my auntie *expletives* and my cousin who they have detained in Ladyville right now. For years they have been doing this. Do you understand me? Those things aren’t making any sense. All of us are one blood. All of us are family. Why can’t we live in peace? Do you understand? I would really want Chester to please look into this. Do you understand? Or I can go to the office and try to see if I can speak to this man to have him look into this situation here because the police at the station aren’t really doing their jobs the right way. This thing goes both ways. This isn’t a side taking thing here. Do you understand? Fair is fair. This has been happening for years and years and years and nobody is trying to look into this situation here. Do you see what is happening now? Do you understand? They are sending threats about how they will send men to make them shoot up. I haven’t slept. To be honest, 5:34 this morning is when I went to go and lie down on my bed when I saw daylight break. I have nieces and nephews who live in my sister’s yard.”

Arnold stated that this has been an ongoing ordeal for the past ten years and wants the authorities to intervene.