A family of five in the Cayo District is displaced after a fire completely destroyed their home yesterday afternoon in Camalote Village. The blaze broke out at around two o’clock and gutted a wooden structure in the Good Living Ranch area of the village. Despite efforts of fire fighters, the home and all its content were destroyed. Cayo Correspondent Fem Cruz spoke to the victim Frederick Garden about the tragic incident. 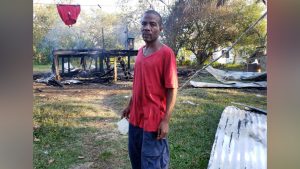 Frederick Garden, Fire Victim: “After 2, I was at home working on a little cement house that I am building in the same yard where the house burned down. While working on the house, I was listening to music from a computer and a bluetooth speaker inside my house. So when I realised that the music stopped, I went to see the reason why the music stopped and  that’s when I realised that the house was in flames and burning.”

Fem Cruz, Love FM News: So what did you do?

Fem Cruz, Love FM News:So tell us what all you lost.

Frederick Garden, Fire Victim: “I lost all of the total everything that I own. I lost all of my house. If anyone wants to help me, they can contact me at my phone number #664-7759 or they can either visit me at my home in Camalote Village at Good Living Ranch.”

Frederick Garden, Fire Victim: “My house was an 18X20 house.”