Thirty-one-year-old German Castellanos, the man accused of fatally shooting his father, 79-year-old Daniel Castellanos, was released by police today. Investigators do not have sufficient evidence to charge German with any crime in connection to his father’s murder. Daniel’s body was found at his house on Garza Street in Belmopan at around 12:20 on Saturday morning. He was seen with gunshot injuries to his face. Reporter Vejea Alvarez was in Belmopan today and found out more. 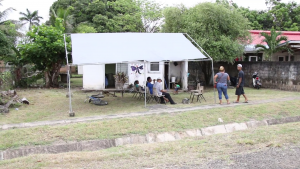 Vejea Alvarez, Love FM News: Just after midnight on Friday, the echoes of gunshot broke the silence of a quiet night on Garza Street in Belmopan.

Luis Castellaños, Son of Deceased: “I just told my dad I was going to rest up and the only thing I heard like a 50 minutes afterward, but I was already looking to go into a sleep, drop asleep doze. You know? I was just reaching a level there. I wasn’t sleeping full, full. But, I heard this bang, bang, bang, and I jumped up but when I jumped up I didn’t hear anymore. I didn’t hear any railing up, no screams, nothing. Everything was silent, just one silent zone so I didn’t hear anything after that and I was looking to go back to sleep because I didn’t hear “Help!” You know? Something that would make me jump up out of my bed. Now I just got a little bang, bang again on my door but this time it was my door.”

Vejea Alvarez, Love FM News: Luis Castellanos said that by the time he got out of his bed, his father had already been shot and killed, allegedly by his brother, 31 year old Herman Castellaños. 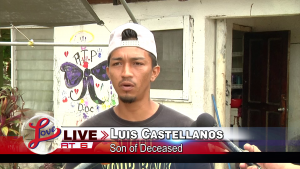 Luis Castellanos, Son of Deceased: “When I came out from my room and I saw my dad on the ground in a pile, in a pool of blood and you know when you’re asleep and you just get up, I didn’t know if it was a dream or something I was going through and when I saw my dad down there it was like, I don’t believe this thing here still. I hugged my dad on the ground and I told him I was sorry I wasn’t up. If I was up, I would have jumped in front of him for those bullets. I am telling you that. I’m sorry I wasn’t up.”

Vejea Alvarez, Love FM News: Castellanos’ killing has torn his family apart and left them wondering what really transpired. Luis says that the only person who witnessed the incident was his brother’s step-daughter who has reportedly now changed her story.

Luis Castellanos, Son of Deceased: “She just told us something. Well, told me then because it was only me in the house when she was left right at home and my dad was on the ground. But what she told us was that, well told me, was that it was one of my brothers. Right? And now we have a next information that she is saying she binged that up. It’s not so. So we stay like we are confused. We don’t know what to believe.

Vejea Alvarez, Love FM News: And Castellanos’ family aren’t the only ones that are not sure as to who killed him. According to Police spokesman, ASP Fitzroy Yearwood, investigators have been instructed to release Herman Castellano and continue their investigation.

ASP. Fitzroy Yearwood, Public Relations, Belize Police Department: “1. There are about 10 residents in that home and working with the statements and after seeking advice from the DPP office, our investigators were instructed to do a more in depth investigation before levying any charges. We want to be absolutely certain that we have the person that is responsible without a doubt so as to not do any injustice.”

Vejea Alvarez, Love FM News: Luis said his brother never showed any signs of wanting to hurt the senior Castellanos so he finds it hard to believe that his brother could have committed such an atrocity.

Luis Castellanos, Son of Deceased: “RIght now, I don’t know what to believe. That day I was locked up and they grabbed my brother. The men they actually took me from here because, you know, it was a crime scene and only I was here so they had to do their job. They took me in and I spoke to my brother. Not talk to him in front like what I’m doing with you all but I was in the cell when I heard they brought in a Herman Castellanos and I hollered at him and I told him “Brother, why did you do that? Why did you kill my dad?” And he swore it right there, “It wasn’t me. Those girls are setting me up.”

Vejea Alvarez, Love FM News: Until Castellanos’ family receives a definitive answer as to who killed their patriarch, Luis says they will be reminiscing on the memories they had with the man they affectionately knew as “Doc.”

Luis Castellanos, Son of Deceased: “My pa was a loving man, right? He would have done anything for us then. We could have gotten into trouble, even though we were in the wrong, he still try to back us up right there. He was a person who loved his sons.”