Tonight, cops in the old capital are on high alert after the father of a well-known gang figure was executed over the weekend. Benjamin Hyde Sr. was heading home after buying food on Father’s Day when he was gunned down and left for dead. The 49-year-old was the father of Christopher Hyde, who was charged with being the leader of the Rocky Road Bloods Gang. Reporter Vejea Alvarez tells us more about this Father’s Day fatality

Vejea Alvarez, Love FM News: The blood stains on this sidewalk in downtown Belize City tell a grim tale of a father who lost his life on Father’s Day in the cross hairs of the city’s ongoing and chronic gang warfare. 49-year-old Benjamin Hyde Sr. was heading home on his bicycle when he was executed in broad daylight on King Street. According to Police Press Officer Fitzroy Yearwood, the Rhaburn’s Alley resident was ambushed and shot by a lone gunman. 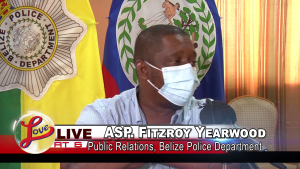 ASP. Fitzroy Yearwood, Public Relations, Belize Police Department:“On Sunday June 19th at 3PM police responded to a scene at the corner of King Street and East Canal where the saw 49 year old Hyde suffering from apparent gunshot wounds all over this body. He was seen laying across his bicycle, Benjamin Hyde. The initial investigation revealed that sometime around 2:58 PM he was riding his bicycle on King Street heading towards Albert Street when a lone gunman suddenly came out of a yard and fired several shots at him.”

Vejea Alvarez, Love FM News: Hyde’s killing is believed to be the result of an ongoing feud between criminal factions in the area. His son Christopher Hyde is the reputed Gang Boss of the Rocky Road Bloods, who are at odds with the neighboring George Street Gangsters. One of Hyde’s nephews, who spoke to our newsroom off camera, says that the family is dumbfounded by the malicious act.

Nephew: “Ras Ben a hard working, dedicated father, grandfather, uncle, cousin and friend and neighbor by extension so I really want those people to know how deeply the family were touched. We were touched very deep. Regardless of what my son did or your son did or what have you don’t take it out of me go look for my son. Find my son, deal with him. It’s you and him have thing not me and you.”

Vejea Alvarez, Love FM News: Police also believe that the father of eight was killed due to his son’s criminal ties but are looking into several different angles. Asp Yearwood discussed how the police will bolster their patrolling efforts in the area to prevent retaliatory violence.

ASP. Fitzroy Yearwood, Public Relations, Belize Police Department: “Knowing that his son is rival with the other gang that belongs to that area where he was shot I mean we have to pay that special attention because this of course could become very volatile and we have prepared ourselves for any type of retaliation that they might try to come with and we’re going hard after both gangs involved in that dispute. Like you stated earlier that it took place a few yards from a police precinct. I don’t know how much more we could heighten our security but we have things in place to try to bring these persons to justice and if you know the dynamics of that area it has a lot of little alleyways that you can travel through so what we will do now is provide our patrols in also these alleyways we have several ways that we can cover that by foot, by motorbike,  by bicycle.”

Vejea Alvarez, Love FM News: Hyde’s family describes him as a hard-working man with a jovial personality who was killed innocently.

Nephew: “He was innocently killed. I don’t know if they were thinking that they were sending a statement etc but he was innocently killed. You killed a man that has nothing to do with your dilemma so that doesn’t make you a man. It does not. It don’t make you a man. We will bury our family. We’re not into any retaliation. God will deal with you that is where we will get our justice from.”