Tonight, a family from the Orange Walk District is mourning the death of their loved one after he was gunned down last night in rural Belize. Just before 7 o’clock, 25-year-old Lisandro Martinez was shot and killed as he and a friend were on a motorcycle heading to Boston Village. It was Martinez’s first night in the community. Martinez had just left his home in Guinea Grass Village yesterday morning to work with a relative in the community. Reporter Vejea Alvarez spoke with Martinez’s friend and his distraught family and files the following report. 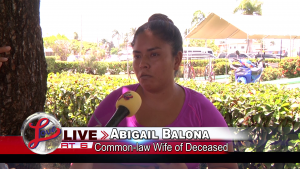 Abigail Balona, Common-law wife of Deceased: “He left home yesterday around 5:00. He was going towards his uncle and when he saw his uncle’s car was going he ran to go and catch him on the next side and that was the last time I saw him. In the night he told me he loved me and he wouldn’t leave me alone.”

Vejea Alvarez, Love FM News: Would you think that would have been the last time you saw him?

Abigail Balona, Common-law wife of Deceased: “No. I didn’t think that because he left happy.”

Vejea Alvarez, Love FM News: Martinez was to return home to his family today. Unfortunately, he will be doing so later this week but inside of a casket. Around 6:00 last night, Martinez and an 18 year old friend who did not want to be identified hopped on a motorcycle and went to a supermarket for groceries near mile 19 on the Philip Goldson Highway.

Voice of Eyewitness, Friend of Deceased: “It was a normal evening for us. We didn’t expect nothing to happen like this. On the way there we were talking about his lives and stuff like that and then we entered the shop and bought what we had to buy for like two minutes and then we went back home and then when  saw like a black in colour car following us but I didn’t think it was like, going to happen like this because two cars had already passed us so I said it was a normal overtake that was going to happen. But then, all of a sudden the car came closer and closer and then after that I took a look at the car the third time then after that I started to hear the shots fired and then I just bowed my head and started to speed off to try to avoid them and try to save the guy’s life because he was already shot.”

Vejea Alvarez, Love FM News: Martinez’s friend says he rushed home and with the help of some other men, immediately placed Martinez in the back of a pickup truck and attempted to rush him to the hospital.

Voice of Eyewitness, Friend of Deceased: “I asked him if he had any problems with anybody here at Sandhill then he said no. He denied three times so I believed him you know because he’s not from here. Then while on the road, he didn’t speak to us at all. He just said his last words that he can’t make it anymore. He can’t see.”

Vejea Alvarez, Love FM News: Martinez reportedly took his last breath while the group neared Ladyville and was pronounced dead on arrival at the Karl Heusner Memorial Hospital. His common-law wife was then informed by Martinez’s uncle. She says up to now, his death still feels unreal.

Abigail Balona, Common-law wife of Deceased: “I thought they were playing a joke with me.”

Vejea Alvarez, Love FM News: How did you find out?

Abigail Balona, Common-law wife of Deceased: “I found out because our uncle called and told me that he got shot and he died already. I still can’t believe it that he is dead.”

Vejea Alvarez, Love FM News: According to Balona, on Sunday night, Martinez agreed to go to the village to work but he was hesitant because he allegedly had issues with a relative from the area.

Abigail Balona, Common-law wife of Deceased: “When his uncle asked him if he could help him haul logs to bring in at Guinea Grass and he told him yes and then he told him to come the following day which was yesterday and that’s how he came and that’s why he went over there. But, he didn’t want to go because he had problems with one of his uncles up there and when he told his uncle, I don’t want to go, he said, because I have problems up there and I don’t want any problems because we are family he told him. Then afterward he said no they won’t have problems because they were going to a different place. Then in the night well they just called us and told us that he got shot.”

Vejea Alvarez, Love FM News: His family says they don’t have a clue why anyone would have wanted Martinez dead. His mother, Estelita, described him as a loving son who she will miss very much. 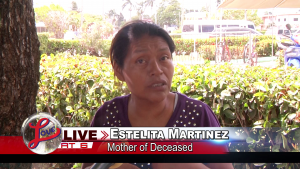 Estelia Martinez, Mother of Deceased: “From what has happened to him, like any other mother I can say that it hurts but I will say there is a God that sees everything and knows everything. One day God will bring the person who killed my son to justice.  Don’t want to cry.  Already cried a lot and I know I have a lot more to cry. All I ask is that God delivers justice. For me, who is his mother, I can say that he loved me a lot. He showed me his love and I can’t say. I understand that he used to drink and he used to be on the streets but let me say this, if I am walking on the street and no one does me anything I can’t do anything to anyone but if they find me, i won’t let myself for anyone to hurt me. I always tell my children that.”

Vejea Alvarez, Love FM News: Martinez’s family says they are leaving justice to the Lord but are left wondering, “Why?”

Abigail Balona, Common-law wife of Deceased: “The only thing I would want to tell him is why did he do it because he didn’t have any problems up there and everything will stay in God’s Hands.”