The chronic gun violence plaguing Belize City continued last night and claimed the life of a father of six. The victim, Darrell Alvarez, was getting water at a public pipe in the CET Site area of Lake Independence when he was murdered. The thirty-five-year-old was shot only minutes away from his home and died an hour after being attacked. Reporter Vejea Alvarez spoke to his family and files the following report.

Vejea Alvares, Love FM News: Tonight, 35 year old Darrell Alvarez has been Belize City’s latest murder victim. On Monday night, the father of six was slain within shouting distance  of his home in the Set Sight area of Lake Independence. Around 9:00, Alvarez was shot multiple times while filling two buckets of water at a public pipe in the area. His sister Kimberly says his family knows who murdered her brother.

Kimberly Alvarez, Sister of Deceased: “We know exactly who killed my brother because the person came, sent a boy to come and hail my brother from here. My brother walked with his two buckets to that pipe like three houses away from my brother’s house.  He looked like he and the person were fighting and it looked like they couldn’t handle him so what did they do? They just turned around and shot him.”

Vejea Alvares, Love FM News: And according to Kimberly, her brother was lured to his death by a man who he had issues with earlier in the day. She says that the duo were at odds because the murderer owed Alvarez money for weed and was unable to pay. 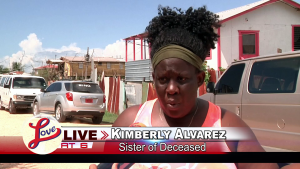 Kimberly Alvarez, Sister of Deceased: “My brother, he doesn’t have a job where he doesn’t have a job where he will make his 15th and ending pay cheque. He sells weed. Weed is his living where he makes his money. He would sell, and he sells the individual a pound of weed and they are to bring back the money but it looks like earlier in the day, he and the person didn’t pay up when they were to pay and they had a problem right there between that and then they came back the night. They already planned what they were going to do. They came back to hail him. If they didn’t kill him anyway we knew that something would have happened because they planned at the field and they waited for him. But, when they sent for him he just said okay then, I won’t go to my sister. Let me go walk to see what they want and he went to the pipe and right there he came. They killed him. Mien.”

Vejea Alvares, Love FM News: Alvarez’s death has brought immense sorrow to his family but his sister explains that the real victims of his calloused murder are his six children who will never get to see him again.

Kimberly Alvarez, Sister of Deceased: “My brother has one 8 months old daughter. He is everything for his kids. Everything for his kids. If you see his baby’s pampers are almost done and he knows he won’t have money to buy that back, he would sit down and cry because he doesn’t know where that pampers would come from. It’s my mother who come “Here son, buy the pampers.” They just took away a child from their father when my niece and nephews won’t even know their father when they get bigger. They won’t ever know the love that their father had for them.”

Vejea Alvares, Love FM News: Did you ever think that, you know, you would have gotten that call saying your brother is dead?

Vejea Alvares, Love FM News: While this bereaved family expected death to come knocking at their door any minute, they’re still left in awe that persons known to them audaciously attacked and killed their loved one.

Kimberly Alvarez, Sister of Deceased: “You all see my mother everyday. You all bid the time of the day, “Morning Miss. Afternoon Miss,” and you all still turned around and pulled the trigger on the same lady who greet every morning. Every morning you all greet my mom. Every morning you come and end up in our yard, up and down through our yard and you all still pulled that trigger and killed my brother. Mister Gunman, you’ve got it coming. Whosoever sent you, you’re going back to them because you have to finish that job that you’ve already started. But, that Man up there, He made ugly but he noh like it. Today fi we. Tomorrow fu unu.”

Vejea Alvares, Love FM News: According to Alvarez’s family, his brother who is a known affiliate of a gang in Belize City has been detained by police. Efforts to prevent further bloodshed are being taken. Reporting for Love News, I am Vejea Alavarez.