On Wednesday night, hundreds of residents from the twin towns of San Ignacio and Santa Elena marched through the streets demanding justice for murdered teen Chris Rodriguez. His killing left the close-knit communities in mourning. Today, the person charged for his murder, 20-year-old Fausto Teck, was arraigned at the San Ignacio Magistrate Court. With help from Cayo Correspondent Eliu Yacab, Reporter Vejea Alvarez has the story.
Vejea Alvarez, Love FM News: This was the moment a handcuffed 20 year old Fausto Teck was taken to the San Ignacio Police Station after he was arraigned for the murder of 19 year old Chris Rodriguez. As Teck was escorted inside calls for justice echoed from the crowds of persons gathered across the street. Many of the team’s family and friends held placards reading “Justice for Chris” while one woman slowly swung a noose back and forth. Rodriguez’s father Manuel stood in front of the police station and watched as his son’s killer strolled past.

Manuel Rodriguez, Father of Deceased: “First of all I don’t see why they didn’t allow me as the father to be up there. They could have searched me down and made sure I had no weapons or anything. I don’t even have the intention or nothing against this boy to kill him or whatever I just want them to do their part, I just want to see that guy in his eyes let him look me in the eyes to let him know that I am Chris’s dad but they shouldn’t deny me from being up there. I just hope justice comes out of this because they haven’t done anything about Miriam Mai and Daisy Miralda from 2016 till now nothing has gotten done as yet. I just hope they do their job and make justice and make this guy pay for the murder of my son.”

Vejea Alvarez, Love FM News: After the teen’s death a video surfaced showing the fight between Rodriguez and Teck. The video shows Rodriguez walking up the Teck and punching him in the face before he was stabbed in the neck. Manuel says that his son had to have been provoked to start the fight.

Manuel Rodriguez, Father of Deceased:  “I’m the type of dad that if my son is doing wrong and they get into problem I will correct them I won’t leave it just like that. He was the type of guy that giving problem out there I would feel it yes but I wouldn’t say much about it because he probably would look for it but this is totally different. He never fought in his life this what happened here is the first time he ever encountered into a fight and the reason I believe he reacted was because that guy had to tell him something. You know nowadays a lot of men young guys tell you you’re an [expletive] , [expletive] , you are a this and that no one would want you to tell them that people will react. So he told him something I don’t know I wasn’t there, there was no audio to recall what he actually said but I know he told my son something for him to react.”

Vejea Alvarez, Love FM News:  Manuel said he looked Teck in the eye as he walked by and wish he could have spoken to him. For now he says he only hopes that justice prevails.

Manuel Rodriguez, Father of Deceased:  “I just hope for justice and before that I would say  he chanced my son. If you are a man you could have fought him hand to hand. That’s the way a man fights, using weapons is a coward and I look at him as a coward.”

Vejea Alvarez, Love FM News:  Teck was remanded to the Belize Central Prison until his next court date. Reporting for love news I am Vejea Alvarez. 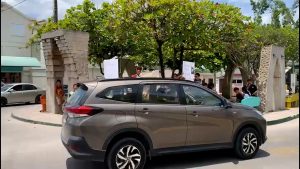