Orange Walk East was also affected. In fact, it was the most affected. Large bodies of water accumulated in villages. Residents of San Jose Palmar and Santa Martha villages continue to be affected. Today, their area representative, Kevin Bernard, is advising that they seek shelter before the situation worsens. 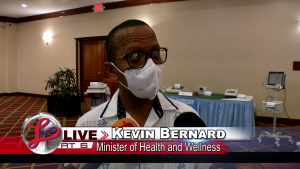 Kevin Bernard, Minister of Health and Wellness: “Yesterday when I was returning from Santa Marta water was already above the normal level crossing over the road and so people had to exit as we were at a Village Council election but when we got into Carmelita, people were flooded. I mean, I was out there late last night assisting people to get their items up to higher ground. We insisted to them that they would need to evacuate. When I checked this morning, many of them still remained in their homes. Water has receded. Thankfully. We are working on the ground. We have the Ministry of Works and through our NEMO. As you know I’m also the Chairman of NEMO in Orange Walk and so I had to, we sent out our team to do the assessment. We’re on the ground in Carmelita. There’s issues in San Pablo, in Guinea Grass, you know, and we are also worried about Santa Marta. They evacuated one family so far, a family of four from Santa Marta at the very lowest end of Santa Marta. As you know that village is always susceptible to flooding so all the water that starts to go down ends up in Santa Marta and so, we’ve put them on alert that should there be need then we’ll need to get these people on higher ground.”