As Floralia Limited faces some opposition and is already having to deal with its first legal challenge, its customer base has been expanding. To date, Floralia is only allowed to have runs to and from Punta Gorda and Belize City. Their small fleet of buses are very modern compared to the majority of buses in Belize. The company has emerged with a slew of media advertisements which Marvin Vanzie, the owner, says have been well received. 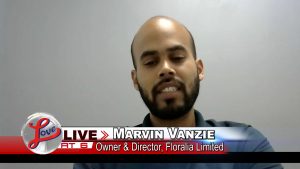 Marvin Vanzie, Owner & Director, Floralia Ltd.: “It’s been really nice to see people’s remarks. When I first saw the different articles that were coming out, the content itself was a bit, I guess, a bit of a surprise but when I started to see the comments then you realise that in the past three months, since December 6th that Floralia has been operating, it’s been a big change from people not being sure about the company and its origins to now being extremely satisfied with the service and in full support. So, it’s been a big shift and it’s nice to see.”

Reporter: BBA Secretary alleged claim that Floralia’s looking to take bus runs from the Tillett brothers up in the north. Is Floralia looking to operate, move to the northern districts?

Marvin Vanzie, Owner & Director, Floralia Ltd.: “No! Floralia is not operating, does not have any present plans to operate in the northern district. We haven’t even put in an application. We haven’t had a conversation within our own team, nor with the transport department about anything in the north. Honestly speaking, I think anywhere in the country that our service would extend to would be every welcome. We are very attentive to people’s feedback on the buses as well as via phone or Facebook and it’s been a continuous flood of information basically requesting, when is it we’ll go to Placencia or when will we go to the west? When will we go to Chetumal? When will we go to the north? And we keep telling, I mean, we’re positive in our comments and our feedback back to people because like any company, you’d like to expand but, I mean, we wouldn’t want to expand at the expense of any kind of strange illegalities or being unfair. So we keep telling people via Facebook that, you know, hold on, as we grow hopefully we could get up there. But, it’s just a general, like you know, positive statement, not necessarily that we’re making any concrete moves towards doing that. We’re focusing, you know, on perfecting our service down in the south, that’s where we’re operating right now.”

Reporter: Do you agree though that competition is healthy and most beneficial to the commuters?

Marvin Vanzie, Owner & Director, Floralia Ltd.: “Oh no, competition is extremely, extremely healthy and that’s why, you know, we’re, we’re, there’s a lot of things that Floralia’s doing that’s shaking up the system and you know, I think any change makes people uncomfortable but, apart from being glad that we’re able to provide a better service, I think that the next thing we’re doing is just making people realise well you know, you have to up your game.”

Vanzie says that a crucial part of the company is high customer service standards. He added that they have come into the transportation industry with a plan for excellence which they plan to continue pursue despite the pushback.

Marvin Vanzie, Owner & Director, Floralia Ltd.:  “It is a huge thing and we train hard and we are constantly doing our best to improve service because if you notice, a lot of the comments, they might say the bus is comfortable but a majority of the comments have to do with the service, that people really enjoy the service and I gotta boast and say that there was this master plan of how we were going to come in. I think what makes our team successful at this point is that we’re extremely flexible and observant and we make some quick changes because honestly speaking, I thought it was going to be different. The initial plans were, well, by comparison, one person is selling rotten bananas and then you come and you give fresh bananas, you’d think that everybody would go for the fresh bananas but the public doesn’t work like that. They are, I guess they are guarded because of things that have happened in the past so there was a lot of having to convince people and for many weeks we were having to run like very close to empty and so we just made sure that we were on a campaign towards informing people and had whatever promotions we could do to get people on the bus and once you experience it then it’s like a, you know, you don’t want to go back. So, per of us adapting on the fly, like everyday we’d have meetings like how we’re going to improve *inaudible* and then we have, I won’t call it loyal customers but we have people who appreciate the service and if possible, because people have to move and they have to move and you know if our bus happens to be around when they’re there then maybe we could funnel people maybe a little half an hour to an hour towards our time but generally people move when they have to move and if they appreciate the service then they’ll wait that additional 15 minutes, 30 minutes for us.”

Floralia Limited was first introduced into Belize in December 2021. 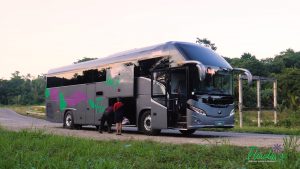