As we reported on Thursday, the Belize Bus Association is challenging the legality of road service permits awarded to Floralia Limited. The association, through its attorney, Senior Counsel Dean Barrow, has written to the Chairman of the Transport Board, Byron Sanchez, informing him that an application for judicial review has been filed to have the court declare the permits illegal and order that they be squashed. While the matter has already been filed in the courts, the owner and director of Floralia Limited, Marvin Vanzie, has come out saying there is no shady business and that all the required procedures were followed.

Marvin Vanzie, Owner & Director, Floralia Ltd.: “I definitely think it’s something between government and the BBA. I believe that there’s a lot of, I think that the BBA is motivated incorrectly but is right now being motivated by somewhat fear. On the back, they feel like Floralia is the boogieman and then in front of them they have a date that the ministry has stated sometime by midyear that they must upgrade. So I get that they feel like if they are being sandwiched but in reality I think that they should redirect some of that fear towards being creative. Like how can you up your service? How can you find creative ways collectively as the BBA to finance so that you could start meeting *inaudible* operate. Nobody’s telling you to find, you know, a hundred million dollars to replace all your buses but at least start the conversation. So I find that right now the lawsuit and all of that is, you know, Floralia represents a reality. It represents the fact that despite many years of saying that it couldn’t be done, it’s like woah, woah, somebody is doing it. So, so that’s why it’s like, you know, let’s stop that. But in reality, I’m not too worried. We went through every proper channel towards making an application. In fact at many times during it, despite everything that we had to offer, at many times I thought that, I was a bit confused as to why it wasn’t being processed properly. It went through many presentations to finally there was a confirmation that it’s like, okay well let’s see if you really could deliver on what you’re promising about the buses and so we went through everything. As far as I know, the board had, that’s the feedback that I got. I put in an application. The board had to meet multiple times. You know, we’re calling to find out what the feedback was. There’s no feedback. Eventually we get a letter that says okay yes and then it got gazetted so as far as we know, it went through all the processes.” 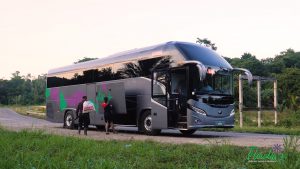