A recent incident brought to the forefront highlighted an alarming amount of trees that were reportedly being extracted from the Machaca Forest. Deputy Chief Forest Officer, John Pinelo addressed this incident and explained that it was a case of misinformation as the logs in question were being stamped at one of the department’s forest stations. 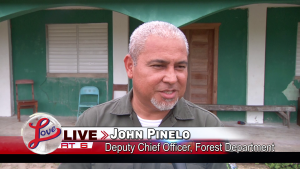 John Pinelo, Deputy Chief Officer, Forest Department: “I am not aware of what the problem is. We haven’t gotten any reports of a problem. I know that one news agency down south had put out something. The information wasn’t correct. Unfortunately they didn’t get in touch with the Department first to find out what it was before they aired what they were going to air. From what I understand, the person passed and saw somebody stamping some logs at our Matchaka Forest Station and usually it is the forest officer stamping the logs. What happens is, whenever you’re pulling out logs from the bush, you put them at what they call a ‘backadeer.’ You pile your logs up and some of them might be really long. When you take them on the highways, you can’t take them that long because Transport Department will stop you. So we will go and stamp the logs and you stamp the two ends with the Forestry hammer but when you want to transport it, you have to cut it in half so then the parts don’t have stamps. So, what we do is we facilitate and we tell them to pass by our office and we will stamp the two ends that you just cut. We just stamp them with the hammer. Now what this gentleman might have seen was one of the loggers climbing on top of the logs stamping with the hammer to assist our Forest Guard who is a minute person. He’s a very small person. So that’s probably what they saw and if they had asked they would have found out that the person was just assisting us. We had already measured the logs, stamped them already but we didn’t want the guy to get in trouble travelling the highway so what we did was stamp the two middle parts for him. That was what was seen and that was what was blown up out of proportion. Like I said, there’s no problem.”