Yesterday afternoon, just after four o’clock over a dozen gunshots rang out in the Saint Martin’s area of Belize City. When the noise subdued residents learned that within a short period two men had been shot with one dying on the scene. That man, 49-year-old Darren Banks, was once the leader of the PIV Bloods in Belize City. Banks was reportedly heading home when he met his demise. Reporte Vejea Alvarez tells us more.

Vejea Alvarez, Love FM News: This was the scene yesterday afternoon at the corner of Amandala Drive and Ebony Street. A crowd of spectators watched as the bullet-riddled body of Darren Erwin Banks was removed from the drain where he spent his last moments. The 49-year-old was once one of the most notorious street figures in Belize City but for a number of years, his name had fallen away from the headlines. Until the father of four was gunned down in broad daylight. His sister, Indira, says that around 4 o’clock Banks left home and said he was going to the store. 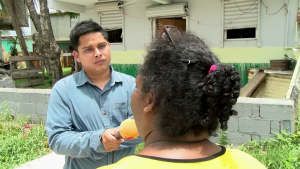 Indira Banks, Sister of Deceased: “I have no idea. I had just finished making fried chicken for him to eat and I said breds come eat the fried chicken that I already made for you. He said, “Yes sis I am coming.” After I made the fried chicken he said, “Sis, I’m going to go and buy two bottles of water for you.” and he went and I said but the shop is right around the lane here. So he went. So he said that he was going out so I said alright then when you come back bring back two water for me then. I never knew it was around by Martins he went.”

Vejea Alvarez, Love FM News: It was while Banks was returning to his Oleander Street home that a lone gunman pounced and opened fire. Banks reportedly tried to escape the hail of bullets but ultimately collapsed and fell in the drain on Ebony Street.

Indira Banks, Sister of Deceased: “I tried to run and run and walk but I lost balance and I wanted to collapse but one of my daughters-in-law held me up and said, “Ms. Inds let’s go. Get the strength and let’s go and see if it is your brother fi true.”

Vejea Alvarez, Love FM News: And what was your reaction when you got to the scene and saw that it was your brother Darren?

Indira Banks, Sister of Deceased: “I started to break down again and started to cry. I said no do not tell me it’s him. I couldn’t take it. So I told them I felt like I was going to pass out.”

Vejea Alvarez, Love FM News: Banks was no stranger to the law, he had escaped several attempts on his life in the past and was accused of several crimes including murder and attempted murder. He was once the leader of the PIV Bloods in Belize City, but according to his sister as of lately Banks was a changed man.

Vejea Alvarez, Love FM News: Ms. Banks, we know that Darren has had a few run-ins with the law. I can imagine that he had maybe made a few enemies. Do you think that maybe it was his past that caught up to him?

Indira Banks, Sister of Deceased: “Nope because he had given up all of those. He had brought back fresh memories.”

Vejea Alvarez, Love FM News: He had turned his life around?

Indira Banks, Sister of Deceased: “Yes. He had turned his life around. He accepted Christ. He went to church and things like that. Sometimes he wouldn’t go because he said that he fears for his life and like so.”

Vejea Alvarez, Love FM News: Why would he fear for his life? Did he have problems with anyone?

Indira Banks, Sister of Deceased: “Because he said that he was afraid they’d kill him but he said “If they kill me sis, I’ve made up my mind already.” Because I told him that a red vehicle passed the other night and he said “Sis, I already made up my mind to go with my mom and my brother.”

Indira Banks, Sister of Deceased: “Yes and he said that he did not fear anybody. He had made up his life already.”

Vejea Alvarez, Love FM News: Back in 2011, Banks’ brother Jassim Gladden was gunned down and died while receiving treatment at the KHMH. His family is now mourning yet another loved one whose life has been claimed by gun violence. But, according to his sister, this time around they aren’t being left to do so in peace. She says that since her brother’s murder the police have been targeting their family.