Former Prime Minister Dean Barrow was out at the Bird’s Isle on Sunday to lend support to his son, Moses Shyne Barrow. The media got him in a brief interview before the final results were out where he expressed both anxiety and pride.

Reporter: Sir, is this a moment of pride or anxiety for you? Explain to me. You know, there were complaints from the other side that you were too active in the campaign, that you were using your clout as a former leader to encourage people to vote for your son.

Rt. Hon. Dean Barrow, former Prime Minister of Belize: “Well, I don’t know that that is so but if it is so, what’s wrong with that?”

Rt. Hon. Dean Barrow, former Prime Minister of Belize: “Exactly so. How could that be an unfair advantage? Man, I earned my stripes. I served as leader of this party for all these years. I was three time Prime Minister. Doesn’t that entitle me to call in whatever chips I may have in support of my son? There’s nothing improper about that. There’s nothing at all unfair, not in the least bit.”

Reporter: Sir, this is the 4th National Convention the UDP is having since January of 2020. How much is that a reflection on your leadership and your tenure that you left the party in a fractious and fractured state? 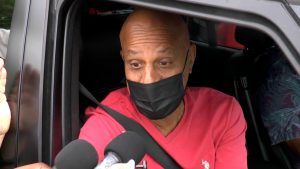 Rt. Hon. Dean Barrow, former Prime Minister of Belize: “But, I don’t understand that at all. How can you say that I left the party in a fractured and fractious state? After I left, and remember I stopped being leader for a year before the elections, what those who come after me do, it’s a matter for them. I can’t have any control of that. When you’re no longer leader, you’re no longer leader. You can’t. How can you blame me for what happened post my leadership? Not proper sir. Not correct.”

Rt. Hon. Dean Barrow, former Prime Minister of Belize: How will you have a succession plan? This is not an autocracy. It is a democracy. You can’t have any succession plan. It is for the people to vote whoever they want as a successor. No man, it can’t work like that.

Rt. Hon. Dean Barrow, former Prime Minister of Belize: “No, I only have a hope that my son will win.”

Reporter: The budget presentation that your son made, he didn’t seem to be prepared. As a matter of fact, he was asking for way much more time.

Rt. Hon. Dean Barrow, Former Prime Minister, Belize: “I’m sorry I can’t comment. If he didn’t seem prepared or if he was not prepared, that is unusual because normally he is extremely well prepared, exceptionally well prepared but I didn’t hear so I don’t know.”

Reporter: And then PM, any comment about the fact that your sister who succeeded you in the division, has not been showing up to House meetings even for the budget debate.

Rt. Hon. Dean Barrow, Former Prime Minister, Belize: “Talk to her about that. You, aye man, as my uncle Dean Lindo would say, if mi sista dead dey noh ah bury me.”

Dean Barrow served for three consecutive terms as the Prime Minister, from 2008 to 2020.