The government’s appointment of retired politician, Florencio Marin Senior, as an advisor to the Sugar Industry Control Board (SICB) left many members of the public with raised eyebrows. Marin Senior was contracted by GOB to oversee the negotiations being carried out in the sugar industry. GOB has since responded to the public’s criticisms by saying that Marin Senior has been briefly brought out of retirement because he has had several many years of experience in this industry. Today, Marin Senior explained what his experience has been like while taking up this role. 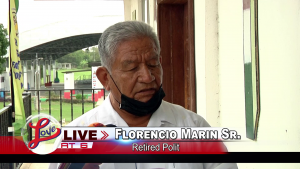 Florencio Marin Sr, Retired Politician: “Well I want to in particular to liaise between the cane farmers association and the manufacturing side of sugar and being the Prime Minister and being the leader of my party I couldn’t say no. I agreed to assist the Prime Minister. My job as I saw it was to get down to the roots with cane farmers, find out the issues affecting them and after about a few weeks, about three weeks, I was able to capture the issues at the roots.”

Upon Marin’s appointment, the president of the Public Service Union, Dean Flowers stated it was a total disrespect towards young Belizeans. However, Marin Senior says that the time for the young public officers to take up this mantle will come, but not without extensive training.

Florencio Marin Sr, Retired Politician:  “Nobody is stopping young people from getting on board. As a matter of fact you see us training young people in this conference here. Young people will have their time. Do you think I can pick up any of those young boys ask him to summon a meeting of the hierarchy of BSI/ASR and the cane farmers association and put them together and give them a lead ? You think they can do it ? They are not ready yet but that is why we’re training them.”

The former politician was hired on a thirty-six thousand dollars contract for one year as an advisor to the government of Belize. His role is to assist the SICB, in brokering a new commercial agreement between the sugar cane farmers and the Belize Sugar Industries Limited (BSI).