And while those two hundred young men are being trained in various disciplines, there is a group of gang affiliates and associates who are currently attending preparatory school sessions in Belize City. It is part of an initiative led by the Ministry of Home Affairs to reincorporate gang elements into the school system. According to Kevin Cadle, the Director for the Director of Youth Services, the school programs are going so much better than expected. 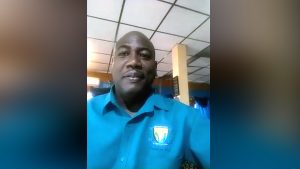 Kevin Cadle, Director, Dept. of Youth Services.: “It’s a process. One of the things that we recognise is that they want to come to school and they’re willing to come to school and they’re serious about coming to school. A lot of the assessments are going to be done on these same guys because the information wasn’t there and we need the information. We need to know who we’re working with and why we’re working with these people and plans for their future development. In terms of the teachers there, they have been really excited about working with these young men and it has been a very good experience from both ends. So the young men are happy to come to classes and the teachers are receptive in receiving them and working with them as well so it has been going pretty pretty well and we could see the productivity that will come out of it in the end. So we’re looking forward to graduation at some point in time in this particular venture and to placing them back in normal school. So that is one of the big things that we’re looking forward to. We’ll have a few that will not make that transition, however, we will not make that transition but we’re not going to give up. Once they don’t make the transition, it’s counselling all over, coaching, guiding, and bringing them back again so that they could get up off their feet and get up back on their feet and start moving forward. So that’s the process. The process is that you fall but you get up and you start moving again and  that’s what we want to do and that’s our plans coming forward in terms of what we’re doing. We have seen some changes. I believe the nation has seen some changes. I know that you guys have recognised the approaches that this new team led by the LIU along with the Department of Youth Services and Home Affairs is totally different. It’s not just giving young people cash and having them on the streetside. They’re literally now engaged in programs so it’s a whole different approach to working with them as you can see.”

Love News sought further information on this endeavor as it relates to a monitoring and evaluation system. We asked him who is overseeing the gangs in school initiative to address issues such as truancy, performance and cooperation. According to Cadle, there is a point person in place to ensure the success of the program. Additionally, he says that there are efforts making in socialization for the participants.

Kevin Cadle, Director, Dept. of Youth Services: “The Department of Youth Services along with LIU, in the department we have a specific area known as the Governance Planning and Research Area that is led by Mr. Nomar Bembridge, who last week did the presentation on our research, the National Youth Needs Assessment, and so along with his team, they will be responsible for ensuring we have the M&E going on with our programs that we have. We met last week Friday on it and we’re going forward with that. It’s very serious about doing that and having the monitoring and evaluation pieces of it. I can tell you that also we have see now that the Ministry of Home Affairs along with partners have brought on Ms. Sharole Saldivar as the project coordinator and you will be hearing from her certainly in the future, to be able to assist and guide the process so that we could be able to have all these things in place to be able to not just monitor and evaluate but to look at the success rate of our programs that we’re implementing because we are doing a lot. We are doing a lot and we’re on the ground and we’re working very hard so we do need to look at the rewards of our work and that comes with the M&E, the OVIs, the indicators need to be there, so most definitely the Department of Youth Services’ governance section along with Ms. Sharole will be doing some of those together. As we move forward, one of our strategies is the socialisation of these guys, the re-socialisation and culturalization of these young men, meaning that we want them to start communicating more with each other. We want them to start participating in programs more with each other. That will then assist us in de-escalating the level of gang tensions because the more people get to know each other, the more they start working together, and the more they start collaborating together then it could ease the tensions and you could see a level of socialisation taking place among these young men when they start getting to know each other and eventually we want to encourage even the families. We have a program for the women. We want to encourage the women to participate and be a part of the process. We also have the Violence Interrupters Program and we are hoping that with the cross cutting programs that we are having, that that could assist us to further minimise the level of social problems that we have especially where communication is one of the major factors involved in gang violence. People tend to not know about each other and, therefore, they tend to speculate and it leads to one thing leads to the next where people end up dying over silly things. It’s not even major issues that they’re dying over. If it’s not drugs then it’s over girlfriends and stuff like that. So we have been able to take the guys to locations where they are comfortable as well as assisting in bringing them together as much as possible to be able to recognise that we’re all Belizeans and we’re all form one city and it makes no sense to be killing each other and, therefore, we believe that the approach and the strategy that is being utilised is working.”