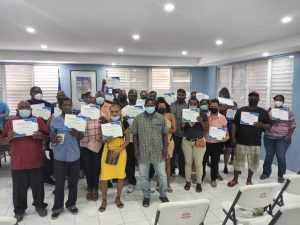 Fifty small businesses in Belize City have received a five hundred dollar grant courtesy of Port Loyola Area Representative Gilroy Usher. The twenty-four thousand dollar donation was geared toward improving the lives of business owners in Usher’s constituency. A handing over ceremony was held yesterday morning at Independence Hall in Belize City where Usher spoke about the important role small businesses play in a community.

Gilroy Usher, Area Representative, Port Loyola: “In the Port Loyola division that I represent, because the Port Loyola community and I gave 50 small businesses in the division a grant of $500 each for items for their services and what are some of the businesses that benefit from that thing? We have mechanics, food vendors, electricians, cabinet makers, grocers, land keepers and wood carvers. All of those are just some of the many small businesses that we assisted yesterday and it’s not the first time I’ve done it because since I’ve been the area representative for Port, I have assisted over 60 other businesses but this one was historic because it’s the first time that, at least that I know, that at a single event 50 small businesses have been assisted with supplies for their business and as I said, $500 each. Now why is it important to assist small businesses? 1. Small businesses create a wide range of jobs for people, that’s one. 2. Small businesses provide a wide range of services and small businesses also give people the opportunity to uplift themselves. You know as a result of this small business, I know a family, I know a person that was selling tacos for someone and he used the $500 worth of supplies to start up her own small business, creating more money for herself and her family. And finally, who are the people at the event? We were lucky to have the Chairman of the People’s United Party, Henry Charles, who is also Minister of Public Service. We were also lucky to have Mr. Major Jones who is the Chairman of the Belize Port Authority and Councillor Javier Castellanos and we were also able to have Mr. Norman Usher who is the Chairman of the PUP Port Loyola committee. So I want to say thanks to all those persons who participated in the event and I urge all the recipients to put the items that we gave them for their businesses to good use so that they not only make money today but for the months and months and months and years to come.”

Usher stated that his grant program initiative will continue with another round of distributions later in the year.