Vehicular activity on the Philip Goldson Highway has been restored after repairs were made to the culvert that was partially washed away.  On Sunday night, the road near the BSI and Tower Hill junction around Mile 60 had to be closed and traffic had to be diverted. The culvert gave way due to the high volume of rainfall that was occurring since late that afternoon.  The Ministry of Infrastructure Development’s Chief Engineer, Lennox Bradley explained that a team was deployed and was able to quickly repair it.

Lennox Bradley, Chief Engineer, Ministry of Infrastructure Development: “In terms of the culvert that the media keeps saying is in Carmelita, I like to be more precise. The culvert is nearer to the junction near the Belize Sugar Industry. It’s a road that we call N1 that intersects with the Philip Goldson Highway. Early Monday morning about ‘round 7:30, we had our contractor backfill the surface material that was washed away from that culvert and so the roadway, the Philip Goldson Highway near that point was open to traffic from around 8:00 or a bit before 8:00 the morning, Monday morning.”

Rainfall is expected to continue this week, which is why Bradley says that they have been keeping a close eye on the Mameyal culvert as it has always been prone to flooding.  He adds that they have elevated the area in hopes that this will alleviate some of the impacts of flooding. 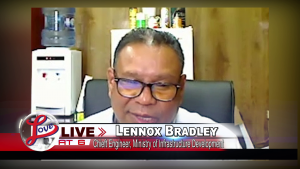 Lennox Bradley, Chief Engineer, Ministry of Infrastructure Development: “In terms of Mamayal, that we had anticipated that if the weather conditions had remained the same, because of the size of the catchment area, water would be moving towards the Mamayal Curve. But, fortunately, the amount of rainfall that we had received is not what we had expected and so the culverts that we had installed at Mamayal are performing quite well right now with the volume of water that is traversing that area. That particular area, the Mamayal Curve, because we are cognizant that it’s prone to flooding, we have lifted part of it nearly 3 ½ to 4 feet high and we have also included more drainage structures. So the culverts and what we have there seems to be performing well for the volume of water that we have received.”

Today, NEMO assisted families that were affected by the recent floods in Orange Walk and Corozal.  The NEMO teams and Area Representative, Kevin Bernard, distributed supplies to families who were affected by the recent downpour and are in urgent need.  While there is a plan in place to ensure the well-being of the residents and infrastructural repairs, the Chief Executive Officer in the Ministry of Food Security, Servulo Baeza, explained that currently there is no insurance plan for crops and livestock.  He says that fortunately there were no agricultural damages.

Servulo Baeza, CEO, Ministry of Agriculture, Food Security and Enterprise: “Thankfully, up to this moment on our preliminary assessment, we haven’t really been getting a lot of reports of damages to cops and so forth. So it would seem, at this moment, preliminarily, I’m still waiting for the report but it doesn’t seem to have caused a lot of damage in terms of the agricultural sector. A lot of damage was more to infrastructure in terms of culverts being washed out, roads and in town, in Orange Walk Town, I know there was a lot of, there was a bit of flooding, you know, in homes and so forth. Unfortunately, we don’t really have what you would call, for instance, like crop insurance or something like that. It is something that we are looking at as a region, as members of CARICOM. There’s some initiative right now to try to look at what we could do in terms of having some sort of insurance or disaster fund but it’s something we really have to work on.”

A Flood Advisory was issued today for the Rio Hondo at Blue Creek North and the New River at Tower Hill and Caledonia, as well as downstream at Santa Cruz, San Antonio, San Roman, and Douglas to the coast.