Churches have been fervently fighting against the Briceno Administration on the legalization of marijuana. The National Evangelical Association of Belize (NEAB), the Belize Council of Churches, and the Belize Association of Evangelical Churches launched a petition for a referendum. Over a month ago, the churches submitted signatures of some nineteen thousand people who support the call for a referendum. The Minister of New Growth Industries, Kareem Musa, gave an update on the review process. 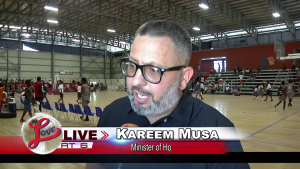 Kareem Musa, Minister of Home Affairs: “As I understand it, there are eight or so public officers who are reviewing the signatures on that. That process has up to 60 days for a review so that should be coming to an end within the next 20 – 30 days and thereafter, if they do have the requisite amount of signatures for the referendum then the referendum would be held 30 days after that.”

The Marijuana bill has become an issue that has taken center stage in the domain of public opinion. One of the public’s major concern is how this will impact children. Minister Musa explains.

Kareem Musa, Minister of Home Affairs: “I would tell you it is actually to the contrary. Currently, there is nothing in place to prevent a child from purchasing cannabis in Belize and that is what a lot of people are not realising that with this new piece of legislation comes greater regulation. You have to be 21 years of age in order to qualify to go into a dispensary in order to purchase cannabis and so a lot of people don’t realise is what we’re putting in place is far more responsible than what the current situation is.”