In an effort to address the nation’s high cost of fuel, Prime Minister John Briceno and a team of Government Ministers met with several stakeholders and social partners to discuss possible ways of alleviating the pains at the pumps. The discussion focused mainly on the impacts of the continuous rise in fuel prices and the effect that different sectors of the country have endured as a result. Senator-Elect for the Belize Network of NGOs, Janelle Chanona spoke to Love News about the outcome of the meeting and recommendations made.

Janelle Chanona, Senator-Elect, Network of NGOs: “I think the bottomline is the NGO community was certainly very appreciative of the Prime Minister and the Cabinet for the invitation to be consulted in terms of our specific ideas and recommendations that we want them to consider going forward so that the impacts that we are already feeling and the impacts to come can be mitigated. We do have some specific recommendations that we will be putting forward. We’ve been asked to get these into the Office of the Prime Minister by this Friday. We will be doing that but it is an important opportunity to have that conversation and to communicate and to hear from them and to relate what the membership is feeling and thinking about because I always feel like that will be conducive to understanding what it is that we’re trying to manage and how we work on identifying solutions moving forward. We are all trying to recover from the COVID pandemic and now from these very sudden surges in fuel costs over the last year and they wanted to call out. It was not any intention of making it seem like we are the squeaky wheel and we want to get the attention but certainly calling out and highlighting the very important role that many of the members play in making sure that the other things that we need to have in play are safeguarded, are protected and that their integrity can support economic drivers. I’m talking, of course, about tourism, about fishing, health services. The NGO network plays an integral role in several of these sectors and if we’ve gotten collectively to the point where something’s gotta give then certainly that was a big part of why we welcomed the opportunity to let the Government know exactly what we’re facing with and helping to figure out how we move from here.”

Among GOB’s mitigation efforts according to the Ministry of Finance, was a move made on Friday, March 11 where the government had lowered the taxes on diesel and had it capped at $13.41; without the capping, the current cost of diesel would have been at $14.70. 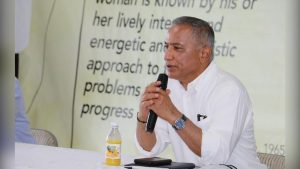