Several government ministers met with members of the Belizean diaspora in Los Angeles, California and in Las Vegas, Nevada over the weekend. The meeting was hosted by the Ministry of Tourism and Diaspora Relations. According to Tourism Minister, Anthony Mahler, the main objective of the meetings was to reach out to a wide cross-section of Belizeans living in and around these cities and to exchange information and ideas that will contribute to nation-building. 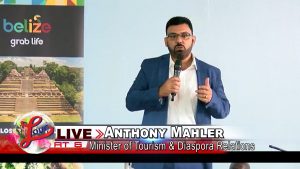 Anthony Mahler, Minister of Tourism & Diaspora Relations: “People in the diaspora, you have been doing great things for us, especially during COVID. You aided many Belizean families during a very very difficult time and so when I was getting prepared for these presentations, I called the Central Bank to see the remittances over time and it has grown significantly and today it stands at about $135 million USD and that is a lot of money contributing back to Belize and I’m sure it’s more than that because that is only through the formal system. You know you send your little thing like brother there, back there in his barrel, and that type of thing, no? With a friend or family and that money goes into educating our people. That money goes into building our homes and so it is important for us to have meaningful engagement for people in the diaspora for far too often, I think we take that for granted. From my tours in the United States so far, a lot of people in the diaspora have said that they felt forgotten. They have felt disrespected. In fact, many explained that when they return to Belize, they get a hard time with Immigration and Customs. Now that’s why we’ve brought some of the technical people here so that we can make some of the changes that we have to do better as people. We have to do better as a government to represent people when they’re coming to Belize or when they want to visit their families. The diaspora unit will continue to reach out because we believe about meaningful engagement with you all. We’ll continue to reach out. We’ve created a website, as you saw from the presentation. We want you to register so that we know who you are, where you are and connect with you continuously.”

Minister Mahler was accompanied by Minister of State in the Ministry of Immigration, Ramon Cervantes Jr.; Minister of Public Service, Constitutional and Political Reform, and Religious Affairs, Henry Charles Usher; Health and Wellness Minister Kevin Bernard and Belize Rural North Area Representative, Marconi Leal. During their presentations, they expressed how important the Belize Diaspora is for the country. 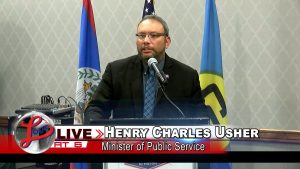 Henry Charles Usher, Minister of Public Service: “We want to bring you back home, not, maybe not physically. You don’t have to move back home but we want you to invest in Belize. We need you to invest in Belize because right now, there’s a term in poker called “you’re on a heater.” You ever heard that? When you’re on a heater, the cards are coming right, the chips are building up. You’re good to go. Come on guys, it’s time for you to come as well. Right? Don’t miss the opportunity. Sometimes when you’re around the poker table, sometimes you’ve got to take a seat back and relax sometimes but when the cards are coming, you’ve got to go push the chips in. You’ve got to push the chips in the middle of the table, if not, you’re going to miss that opportunity.”

Kevin Bernard, Minister of Health & Wellness: “We want to tap into you, the Belizeans there in the diaspora, tap into your expertise. A lot of you have come out to the great United States where technology is advanced, where there is greater opportunities, and you can take back home those experiences, those knowledge and share with our Belizean people. A lady from Orange Walk expressed how frustrating it was for her when she went back home. You know, genuinely you’re going home taking gifts or assistance to Belizeans at home and then the Customs officers they dig down all into the bottom of your bag to try and find something to charge you for. We should treat our Belizeans just as respectfully as you treat the tourist that comes to your country and this is why it’s important. We are here to listen to your views, your concerns and recommendations.”

Henry Charles Usher, Minister of Public Service: “A lot of our laws are very antiquated. As a matter of fact, the reason why, I think it was the MC said that, one of the main issues that the diaspora has is that it’s hard to get money into Belize or even as a Belizean to be able to go home and open an account in Belize, it’s very difficult. It’s because of the old antiquated laws that we have in foreign exchange regulations. We have to look at improving that. We have to look at updating those by making sure that it is a little bit easier. You know, I’m always amazed that we open up opportunities to Non-Belizeans but when a Belizean comes home, it’s like the toughest thing. It’s the toughest thing for them to be able to bring their money home. It’s almost like they force you to go to Western Union and what’s the other one? Moneygram. And then you have to send $50 for this one, 100$ for this one, $200 for that one. Come on, it should be a lot easier.” 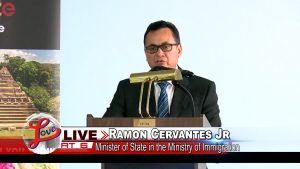 Ramon Cervates Jr. Minister of State in the Ministry of Immigration: “I know many of you visit every now and again. You go back occasionally but also it is to invest in Belize. You know Belize has many opportunities in infrastructure investment, in power, in tourism, in agriculture, and now it’s digitalisation and in different areas, Belize is ripe for investment and we need your input. We’re here to work with you. We’re bringing the Belize Government to you. We are open for business in Belize and we would like that you take a bigger interest at obtaining a bigger stake in the economy of Belize. Let’s not leave that to people from other countries. Nothing against them but you Belizeans, the diaspora, you have a very powerful financial base when you come together and Belize is still your home and so the invitation is open to all of you to invest in Belize.”

It is estimated that over 300,000 Belizeans are currently living abroad, and the majority of those are residents of the United States.