Two elderly brothers tonight are being taken care of by the Ministry of Human Development. Pictures of the brothers’ living conditions went viral today prompting calls for assistance. Reporter, Giovanna Moguel, visited their residence to hear their story. Here is that report.

Jovanna Moguel, Love FM News: The Gomez brothers found themselves living in garbage. No potable water. No food. No clothing and not even a bed. They rest their heads each night on tattered blankets over an old car seat riddled with rusty nails, sustained by one plank beam. Should the makeshift shelter collapse, it could have led to fatal results. 63 year old Carlos Gomez and 73 year old Orlando Gomez were once construction workers, however, as they grew older they needed to put down the hammers and drills. Carlos explained that there are many risks to being exposed out there. 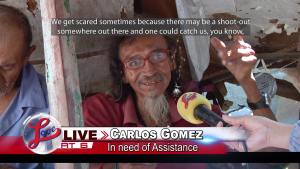 Carlos Gomez, In need of Assistance: “We have to take it as it comes. That’s the life of poor people. We have to take it how it comes. We get scared sometimes because there may be a shoot out somewhere out there and one could catch us, you know? Yes. Since they are running away from the authorities.”

Jovanna Moguel, Love FM News: These elderly siblings have seen many days filled with hunger pains and many nights filled with fear of victims of a stray bullet. They live among vermin and poisonous creatures but that isn’t Carlos’ only concern. He has seen his older brother’s health condition deteriorating day by day.

Carlos Gomez, In need of Assistance: “He needs medical attention. He can’t move around as he would like to. He used to go out too but the way he is, his energy levels have dropped, perhaps because of his age. I would like help to be able to hospitalise him to put him somewhere they can help him.”

Jovanna Moguel, Love FM News: Today, their luck may have changed as the Gomez brothers were visited by the Department of Women and Families Support and they are now being assisted. The CEO of the Ministry of Human Development, Anya Santos Leal, spoke with Love News via Zoom and explained that the case will be looked at closely to see how the Gomez brothers can be adequately helped.

Tanya Santos-Leal, CEO Ministry of Human Development: “The elderly gentleman is currently at the hospital being assessed and for observation and we are actually going to do some more case management to see what is the best option for him and his relative as well. I do believe we have identified a family member and there may be challenges as I mentioned there for them to be placed there  but we are working on that as well.”

Jovanna Moguel, Love FM News: Santos-Leal urges the public to refer these types of cases to the ministry so they can address the situation in a timely manner. She further stated that sensationalising people can be counterproductive as it can lead to victimisation. Reporting for Love News, Jovanna Moguel.