Tomorrow July 30 is World Day against Trafficking in Persons. The day is set aside each year to educate people that trafficking in persons is a crime. It also serves as an opportunity for people to understand the harms of human trafficking and its impact on people’s life. In light of the day, today, the government held a ceremony to showcase the work it has been doing to end human trafficking in Belize. Vejea Alvarez has that story.

Vejea Alvarez, Love News: Using technology to strengthen the fight against human trafficking in Belize that’s what the government is aiming to do. Today, the Ministry of Human Development and Families signed a memorandum of understanding with the Human Trafficking Institute (HTI). The agreement is aimed at improving the services provided to trafficking victims. The most vulnerable population continues to be mostly women and children who are taken from their homes and exploited in horrible working conditions, sexually abused, and trafficked for sex. Minister of Labor, Oscar Requena says that within the last five years there have been 70 instances in Belize of suspected human trafficking. 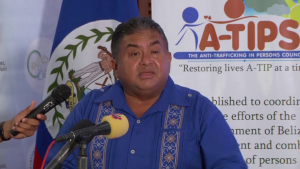 Vejea Alvarez, Love News: The Human Trafficking Institute has been working with the Government of Belize to combat these heinous crimes since 2017, and according to Chris Dick, HTI Country Director, the agreement will greatly strengthen their efforts. 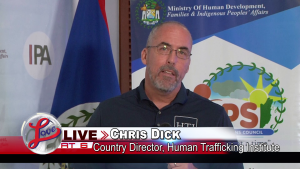 Chris Dick, Country Director, Human Trafficking Inst.: “We recognise today as a day set aside to sort of recognise this fight but understanding that the fight doesn’t just take place on one day. It takes place on the days, and the weeks, and the months, and the years, to shape at home, to outsmart those traffickers who are trying to exploit others and HGI, as I said, is honoured to walk with the Government of Belize. We are grateful that the Government of Belize has been innovative in their response to trafficking and I think that Tier 2 ranking improvement is indicative of that.”

Vejea Alvarez, Love News: The theme for 2022’s World Day against Trafficking in Persons is “Use and abuse of technology”. It focuses on the role of technology that acts as a tool to enable and impede human trafficking. But, here in Belize, our government is seeking to utilize technology to anonymize how persons report such crimes with the launch of their P3 app. Minister of State in the Ministry of Human Development and Families, Elvia Vega Samos, spoke about the expectations of the app. 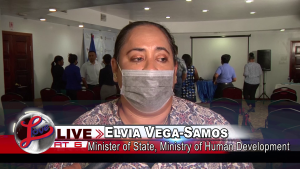 Vejea Alvarez, Love News: This year the US Government in its Trafficking in Persons Report upgraded Belize’s status from its Tier 2 Watch List to Tier 2. CEO of the Ministry of Human Development and Families, Tanya Neal Santos, says the change is relief but conceded that there is much more work to be done. 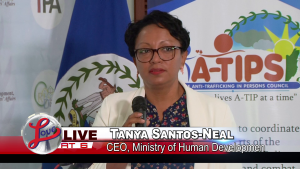 Tanya Santos-Neal, CEO Ministry of Human Development: “The regulations or the rule is that you can only be on Tier 2 for two consecutive years and we got a little bit of leeway because of the pandemic, COVID-19 but had we not been performing, this year we would have gone down to Tier 3. Nevertheless, all is not well. Yes we did get an increase in ranking to Tier 2 but we were told there is still a lot to do.”