Belize Electricity Limited has confirmed that the company is not planning on passing on the rising cost of power to consumers. You will recall that in January, BEL and the Public Utilities Commission (PUC) were at odds over who should have footed the increase in rates that was deemed necessary by both entities. BEL suggested the implementation of the increase to be placed as a debt owed by consumers to BEL that can be paid off down the line. However, the PUC decided to reduce the rate of return for BEL stakeholders to absorb the increase and minimize the cost to the citizens. In a press briefing held earlier today, BEL’s General Manager of Employee and Corporate Services, Dawn Sampson-Nunez stated that the company is aware of the current economic constraints but is cognizant that the cost of power continues to rise. And, according to Sean Fuller, Sean Fuller, BEL’s General Manager of Supply and Retails Services, the company is seeking alternatives to ensure that the cost of power does not see an increase. 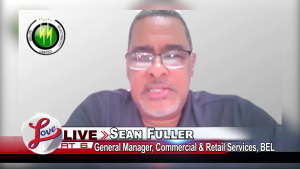 Sean Fuller, General Manager, Commercial and Retail Services, BEL: “If you look at our five year business plan and our long term plans, our intent is to stabilise and, as much as possible, reduce the cost of electricity to our customers. To accomplish that, we must act immediately to install these in-country renewable energy resources on the network. We cannot supply on the Mexican, we cannot depend on the Mexican supply as we have had to in the past when the energy cost from CFU was high. As Dawn mentioned, there are times of the year when we have to conserve water for the hydro facilities, in fact this year has been predicted to be a drought year and so we’re trying to conserve as much as possible the water reservoir at the Chalillo facility.  That in the event we have a system failure like we had last Friday, we have enough water in these reservoirs to be able to bring back our network using in-country resources. Imagine if we had pretty much dried out that Chalillo facility over the last three to six months. Friday’s event would have caused us to not be able to bring back the entire network and so there’s a water conservation system we have in place to be able to manage the water levels to ensure that in the event there are issues with the network we can bring back the entire that we use in-country resources. But, to answer your question directly, renewable energy resources that we have looked at and study has confirmed needs to be installed will be installed as quickly as possible to maintain the energy costs to our customers. Our goal and our aim based on our plans are not to have any increases in costs to customers and we will try and bring down that cost as much as possible using these renewable energy resources. But another thing that’s very important, the development of this country and the maintaining of our electricity rates requires increased sales not on the existing customer but we need new industries. We need new development in the country or continued development in the country because the more we can sell using the existing network that we have, it lowers the unit cost of delivering that network, that energy to our customers.”

Also commenting on the issue is the Chief Executive Officer of the Ministry of Public Utilities, Jose Urbina, who stated that the ministry is evaluating the situation to ensure that customers are treated equitably.

Jose Urbina, CEO, Ministry of Public Utilities: “There are different views in how we should deal with who repays. But there are also views from the regulator standpoint in terms of what should be done. What are the check and balances that the regulator needs to have in place to ensure the right decisions are being made. From a utility standpoint and from a Government standpoint, sorry from a Government standpoint, we need to ensure that we have the policy which would be the guiding policy that the utilities and the regulator would use to ensure that we are providing value to our citizens and in this case, the paying customer. It is something that is in front of us. I don’t want to give an official position as the ministry but I think that the stakeholders or us as the stakeholders need to sit and align ourselves in terms of how the regulators must do their jobs and how the utility companies need to take the decisions, of course, to minimise cost to our citizens. There are so many things that are within the laws or bylaws of the utility companies and not only from BEL but you have BTL and you have BWS. Passing the cost has some advantages nonetheless. When utility companies seek to make expansions whereby the return of investment is quite low, you would need to invest that, recover the invest in 35, 40 years, passing the, or sharing that cost among all the customers is beneficial. But of course, we cannot overlook the fact that because of some decisions that are made, cost is passed on to the consumer so again, I don’t want to make an official decision. I have not discussed this in all details with the minister and I think the minister needs to make the call in terms of where we stand. But, we need to work as stakeholders to ensure that the value is provided to our citizenry.”