Last week, we reported on the mats of sargassum that have been inundating the coastline of Belize. The brown blankets of algae that have been affecting top tourist destinations across the coast of the country are posing a serious problem for visitors and residents alike. To tackle the issue, the Ministries of Blue Economy and Tourism have sought the assistance of a Mexican-based company. Minister of Blue Economy and Area Representative for Belize Rural South, Andre Perez spoke to Love News about how the government is trying to address the problem. 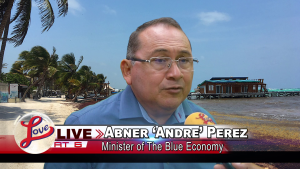 Abner “Andre” Perez, Minister of The Blue Economy: “I think at this point in time we have something solid in place. We have visited – combined ministries of the Ministry of Tourism, the Ministry of Sustainable Development and the Ministry of Blue Economy we sent out a team to Playa del Carmen. I think we have found a project there that they are doing by a company that we feel is the best and practical. So apart from that meeting that I told you we held in San Pedro the team came to visit us. Apart from the team from Belize that went to visit we invited the same company to send their experts to look at us. I think we have a golden opportunity to tackle the sargassum problem. We will never be able to solve it completely but I believe we have finally a project that’s going to be practical and easy to implement. It’s going to cost but I think we are working on that right now to partner with these people. It entails the pontoon boats that instead of going to the beach and extract the sargassum we are thinking of an ambition plan to get the sargassum in the waters, go to reefs where they’re coming in at different channels to capture the sargassum before it reaches the resorts, the entire shoreline if you want to talk and whatever remains that goes to the beach can be cleaned up. It will entail having a free to pontoon boats and perhaps a barge to make sure we put all together the sargassum. It is going to cost but that is also in the works as well as the cost analysis how much it will cost, who is going to pay for it, where we’re going to get the funding but it’s going to happen sooner rather than later right now. So obviously there’s the ambitious plans and we want to very soon put it on a test run to bring one of them at least these coming weeks to finalize one to see how it works. The issue of disposing is always a problem how you collect it first and that’s the biggest part of cost is how do you get all of that sargassum on the beachfront to collected in one collecting area. The key thing with this new project is the one fleet of pontoon boats where they’re putting it in one collecting area and that’s the hardest part. Whenever we get that collecting area there is the endless, the possibilities of dealing with that is endless we’re talking about turning into bio mass, we want to do it for fertilizer, I’ve heard people talk about using it for fish feed for certain fish like tilapia and of course we can use it as landfill so these are the things that we’ll be able to look at but first is getting that sargassum out of the waters and have it in a collection center from there we can move on.”