The Government of Belize’s housing pilot project has been rolled out across the country and has provided homes to deserving families. The project was launched in September last year by the Ministry of Infrastructure Development and Housing to build ten thousand starter houses. Some persons have found it difficult to apply since one of the requirements is to own a piece of land. Minister Julius Espat says his ministry is now looking to build residential communities in rural areas to provide citizens with land and starter homes. 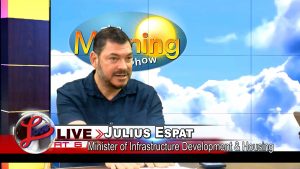 Julius Espat, Minister of Infrastructure Development & Housing: “We are doing now a prefabricated option of the design. So the same design now, we have gone to a pre fabricator in the Belize district that is now presently building 50 homes for us and those 50 homes will be the exact same floor plan layout but all the walls will be concrete and the roof will also be concrete, just assemble it. The beauty about the prefab is that the cost that we spent on one house, he is providing it the same cost including land. So the efficiency that he had with building it by prefabrication, he applied it to the cost of the land and in that case we got the land and the house for the same price.”

Ernesto Vasquez, Host, The Morning Show: So this is for persons who don’t have any land?

Julius Espat, Minister of Infrastructure Development & Housing:  “Well we found out in the first year that the major problem we had was not building homes, that’s easy for us. It’s that nobody has land and so it was very difficult for us to be able to build homes when nobody has land so we were two houses in this district, three houses in that district, hoping to find a. It was, and then the Ministry of Infrastructure had to get in and put in roadworks and try to find a way to – and so we made a decision after the analysis that we have to move it to the level of communities and so now we’re opening up to finding we’re in conversation and we have been successful with the Ministry of Lands to try to acquire at least 20 – 50 acres per constituency where we can start building communities and we did the first one in Boom. That’s the one we’re building with 50 homes. The contractor has, I think he had like 200 acres and he carved out a piece for the pilot project, for the first 50.”

Ernesto Vasquez, Host, The Morning Show:  Oh he’s selling that land to you?

Julius Espat, Minister of Infrastructure Development & Housing:  “Yes, that land and the house comes to us at the same price we were paying just for the house because of the prefabrication. You have to understand, it’s like assembly line. How Ford builds their vehicles, how Apple does iPhone. We in Belize aren’t really into prefabrication but it makes life easier and more efficient. You buy in bulk, you produce faster.”

Ernesto Vasquez, Host, The Morning Show:  But this is now no longer a block made house?

Julius Espat, Minister of Infrastructure Development & Housing:  “No this is reinforced concrete.”

Julius Espat, Minister of Infrastructure Development & Housing:   They are poured. They do like moulds and the moulds have the windows already in set and they cut it out and they cast and then they tilt up the walls.

Ernesto Vasquez, Host, The Morning Show: Just tilt up the walls. You bolt them together?

Julius Espat, Minister of Infrastructure Development & Housing:  “We weld them and bolt them together and then the roof comes and sets on top with a crane. It’s a wonderful system.”

Ernesto Vasquez, Host, The Morning Show: And to add to that, can you use the option of blocks if you want to?

Julius Espat, Minister of Infrastructure Development & Housing:  “You have the opt. The options are there but prefabrication, if you make an agreement with a contractor that has a, you can’t tell them to use block cement because then you’re taking away from their efficiency.”

Minister Espat says that another important addition to the pilot project is the inclusion of a middle-income phase which will allow employed persons to access funding for the starter homes through the National Bank of Belize and the Development Finance Corporation with the government’s assistance.

Julius Espat, Minister of Infrastructure Development & Housing: “The housing project, the way we had envisioned it, had various phases. What we initially spoke of was the low income housing phase. This year, we are putting a package together for middle income people that have a job but have never owned a house and really don’t want to start at the single unit level. Those, we can’t put into that package because the way we are scrutinising, the criteria, you won’t be able to get it. So what we have designed and we already got agreement with the National Bank and DFC is that if an applicant comes to the Housing Department seeking a house and has a job then we would look at your income and your possibility of paying. The National Bank has already given us an idea of what range you should be at and then we will fill out all your application process, all that is necessary and present it to the National Bank on your behalf. From there you take that opportunity to sit with them and come to the final arrangement. Once the agreement is set then National Bank will come back to us and say build the house for the young lady. What other advantages does it have? Well, you will get a good interest rate from the National Bank. It’s very low. You will also be given assistance by the Government by getting the materials duty free and you will not have to pay for the supervision of the project. You will pay the basic labour that we’re dealing with. If you’re interested in the prefabricated one then we will sit with the prefabricated manufacturer and come up with a good price so the idea is for millennials, like you said, but also for public servants that have taken this 10% last year and we believe it’s a way of, somehow government giving back. That will start this year.” 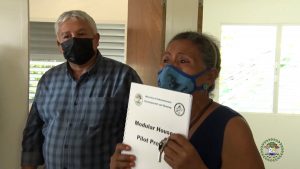