Midtown Grocery Store on Albert Street, Belize City was robbed at gunpoint on Saturday at around three-thirty in the afternoon. Police say that the assailants entered from the back of the store and made off with a large amount of cash. This is the second time that the store was targeted. According to Police press officer, ASP Fitzroy Yearwood, the perpetrators are suspected to be from around the area and three persons have been identified. 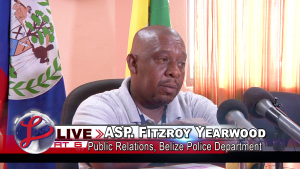 ASP Fitzroy Yearwood, Police Press Officer: “We’re looking for one Shawn Humes and Selvin Waight and Zerick Ramos. Actually we’re looking for three persons because the third person waited outside, the lookout. We are asking the assistance of the public in trying to locate these persons or tell us where we can locate them. I mean this is a daring Albert Street robbery. One of the streets that I consider the safest in this city and for them to come and ruin people’s thoughts about Albert Street by doing something like that we have to bring them to justice. The owner of the store Lias Ahmad, 32 years, has since made an official report but he is stating that one of the assailants pointed a gun at him and demanded that he open the bars because I am certain you know that they don’t allow people to go into that store to shop but that person pointed a gun on him and the other one came and assisted. They searched the cash draw and the he was taken to where they believed he had his stash and yes they relieved him of a large amount of cash.”