During our interview with the BDF’s Acting Chief of Staff, Lieutenant Colonel Jermaine Burns, shared that Belizeans were in collusion with Guatemalans who would illegally cross over to Belizean territory and plant in large plots of land. Burns says that BDF soldiers identified at least four Belizean farmers in the San Pedro Landing area who were helping Guatemalans. Fortunately, BDF soldiers managed to put a stop to it. Burns explained. 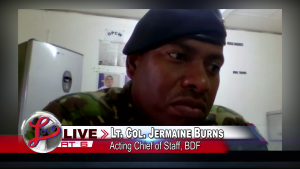 Lt. Col. Jermaine Burns, Acting Chief of Staff, BDF: “I know that we’ve had some issues with Belizeans in the area colluding with some Guatemalans and some issues with Guatemalans coming over on our side to plant, also on our side. But, we have stemmed those issues with special operations in the area. For some of those plantations we brought in the O.A.S. to verify, and once they had verified that they were in fact not owned by Belizean farmers, we were able to deal with those quickly.”

Burns further explained that Belizeans would hire Guatemalans to illegally come over to Belize and work their land.

Lt. Col. Jermaine Burns, Acting Chief of Staff, BDF: “There was collusion in respect to the farmers coming over from the Guatemalan side and being hired by Belizeans to work the land. We looked into it. While we didn’t find any tangible evidence, because those Belizeans that we approached denied those accusations, we were able to stem the plantations really quickly, or to stop the growing of the plantations pretty quickly. And, there has been no report since. This is more on the Sarstoon side of things. So, if you’re chugging down Sarstoon in a vessel on the right hand side, there are some small communities, some farming communities as well. Those are the areas I’m talking about. Some of them, well, a portion of it, is still a part of the reservation, and that is what caught our eyes in the recent past, couple months ago. It led to patrols up in that area, and of course we stemmed the issues before it grew out of hand. And, so, it’s no longer happening. We still have sporadic patrols that go into the area to check, but it’s no longer happening. These are things that just, the Guatemalan farmers would say, “Well, I got permission from person x, y, and z to plant here.” And then, we’d go and check with the person x, y, and z, and they would say no, they gave no such permission. Then we would get the permission through our O.A.S. mediators to stop the planting, and we’d either allow them to reap, or we’d destroy the plantations.”